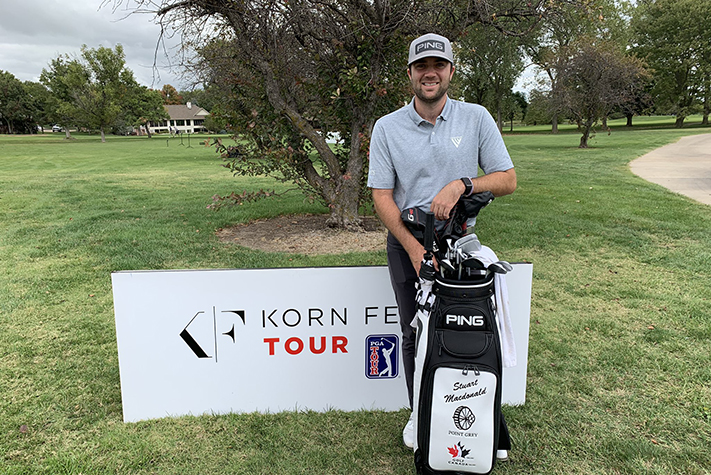 Stuart Macdonald hopes to treat it like any other week, but of course it is not.

This week’s Korn Ferry Tour Championship in Newburgh, Ind., has life-changing implications for Macdonald and so many others who will tee it up in the final event of the season.

Twenty-five PGA TOUR cards will be handed out to the top-performing players in the three-event Korn Ferry Tour Finals. Macdonald is in the hunt as the 26-year-old Vancouver native sits 30th heading into the Tour Championship.

After missing the cut in the first Finals event, Macdonald rebounded with a tie for 18th finish at last week’s Nationwide Children’s Hospital Championship in Columbus, Ohio. The 92 points he earned for that finish moved him all the way to 30th place.

There was a point in Sunday’s final round where Macdonald thought he had a chance to possibly clinch his PGA TOUR card. He was tied for 14th midway through his back nine and a couple of additional birdies may have moved him inside the top five and secured enough points to guarantee himself a spot inside the top 25.

“When I saw the leaderboard I think I was three-under for my round and tied for 14th,” he said. “I was kind of  surprised that three-under had moved me up that many spots, but it was playing difficult. I definitely thought a couple of birdies would be nice at that point. I got pretty aggressive with my approach shots. I hit it close on both 17 and 18 but burned the edge on both of those putts. Two birdies there would have been nice, but at least we’re on the board.”

Macdonald does not know exactly where he needs to finish this week to move inside the top 25 and earn his PGA TOUR card. “Probably a top 15, but I don’t know for sure,” he said. “I guess we’ll see down the stretch where we’re at.”

Macdonald is currently just eight points out of the top 25, but in 2019 -- the last time there was a Korn Ferry Tour promotion to the PGA TOUR -- it took 186 points to finish inside the top 25. That would require Macdonald to earn 94 points this week, meaning he would need a solo 19th place finish or better. All that can change, however, depending on who plays well this week and who doesn’t.

Macdonald just wants to focus on playing good golf and try not to think too much about what is at stake. “It’s kind of a do or you don’t situation and that’s kind of freeing in a way,” he said. “You just go out there and it’s a whatever happens happens kind of thing.”

The Tour Championship is being held at Victoria National Golf Club, which is regarded as one of the toughest tests the Korn Ferry Tour plays. It’s a course Macdonald knows well from his days at Indiana’s Purdue University. “We played our Big Ten Championship there two of my four years at Purdue and I played a Korn Ferry Tour event there last year,” Macdonald said. “So I know it pretty well.

“The golf course is pretty demanding and if you are not committed you're not going to hit good shots and you are going to make doubles really quick and your week is going to be pretty short.

“If it is not windy you can definitely make birdies out there, but if the wind picks up it’s kind of a different story. It’s a great championship golf course. It’s exactly the kind of golf course you want to have a Tour Championship at.”

CHIP SHOTS: Surrey’s Adam Svensson, who won last week’s event in Columbus, is also playing the Tour Championship. Svensson clinched his PGA TOUR card by finishing 11th on the regular-season points list. He has moved up to third spot on the overall points list and could clinch a spot in next year’s Players Championship by moving to No. 1.