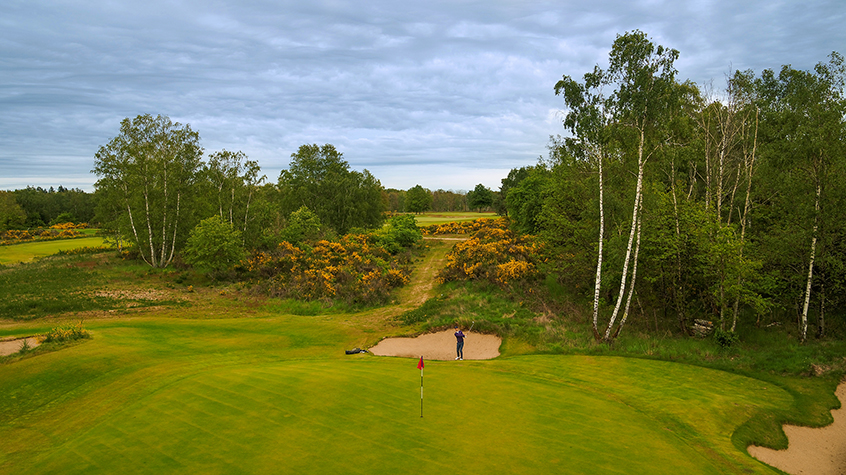 SAINT-LAURENT-NOUAN, France -- The fact they are called the Old Course and the New Course and are located in France, not Scotland, could be considered chutzpah of the highest order.

But no offence was intended to the home of golf in St. Andrews when Les Bordes Golf Club placed those monikers on its two layouts. It just made sense in a simple but elegant sort of way.

Its Old Course, which opened in 1986, is a Robert von Hagge design that has long been regarded as one of continental Europe’s finest tracks. Its New Course is really new, opening this past summer and designed by highly regarded American architect Gil Hanse.

Together, along with the fabulously fun 10-hole par 3 course Hanse created called Wild Piglet, they make Les Bordes one of the world’s most intriguing golf clubs.

Les Bordes is nothing short of a golfing nirvana for its 142 members. They have the golf to themselves as the courses are open only to them and their guests. Les Bordes is located about 90 minutes south of Paris in France’s magnificent Loire Valley. The club sits on a 1,400-acre estate in the Sologne Forest once owned by Baron Marcel Bich, who founded the Bic pen and razor empire. 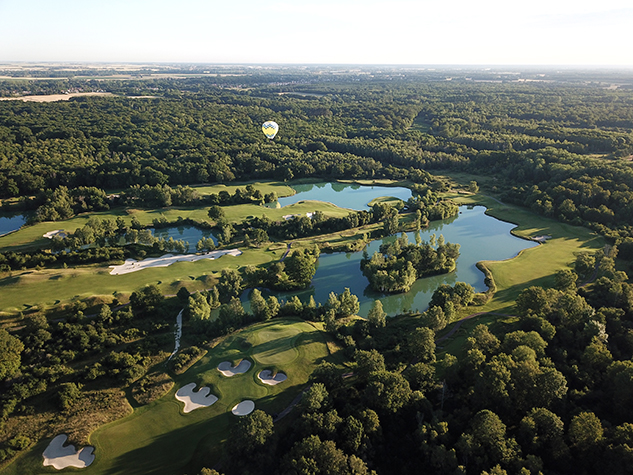 While Les Bordes has in some respects flown under the radar, due in large part to its small membership and its ultra-privacy, things are changing. The addition of the Hanse course has created significant buzz in the golf community and Les Bordes is in the early stages of marketing a new residential community of upscale homes.

General manager Isabelle Sautenet acknowledges that Les Bordes plans to welcome a significant number of new members in the not too distant future. In recent months, Les Bordes has been welcoming golf journalists from around the world to showcase the Hanse course and highlight development of the club. 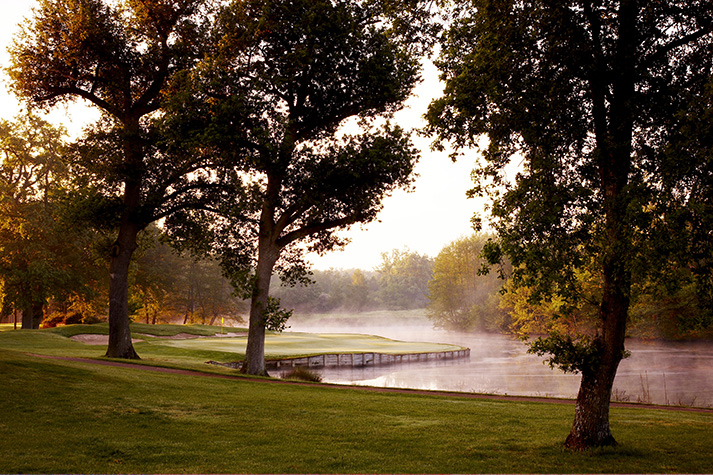 I recently had the opportunity to tee it up at Les Bordes and can report that the Old and New Courses are spectacular but demanding. The Old Course has a 150 slope rating from its back tees and the New Course is 144. But that’s where the similarity ends. The two courses are in fact quite different.

The Old is a contemporary (parkland) design which is much more target oriented and the ball is played through the air, whereas the New is a course where the ground will be used and there is a premium on being able to shape and control your ball along the playing surfaces. 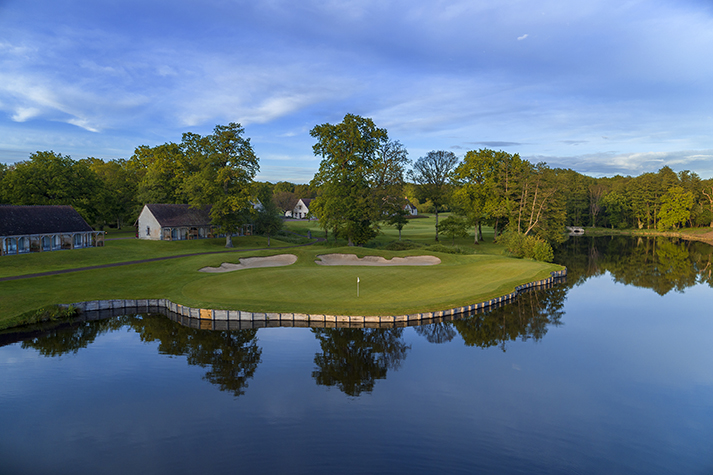 The 18th Green On The Old Course At Les Bordes

Hanse has become one of the hottest names in golf design. He created the Rio Olympic Course used in the 2016 Summer Games in Brazil and his other work includes Castle Stuart in Inverness, Scotland, Ohoppee Match Club in rural Georgia, Streamsong Black in Florida and Craighead at Crail in Fife, Scotland. The New Course is his first design in continental Europe.

“I think it was two different philosophies as to how Robert von Hagge did the Old Course and we approached the New Course,” Hanse says.

“From that perspective, a significant amount of time passed between the creation of both golf courses, and I think that lent itself to, stylistically, different courses that appear differently, because one feels more manufactured and one feels more natural. Neither one is right or wrong, they are just different and one golf course extracts a very harsh penalty for poorly played shots and the other is a little more forgiving. 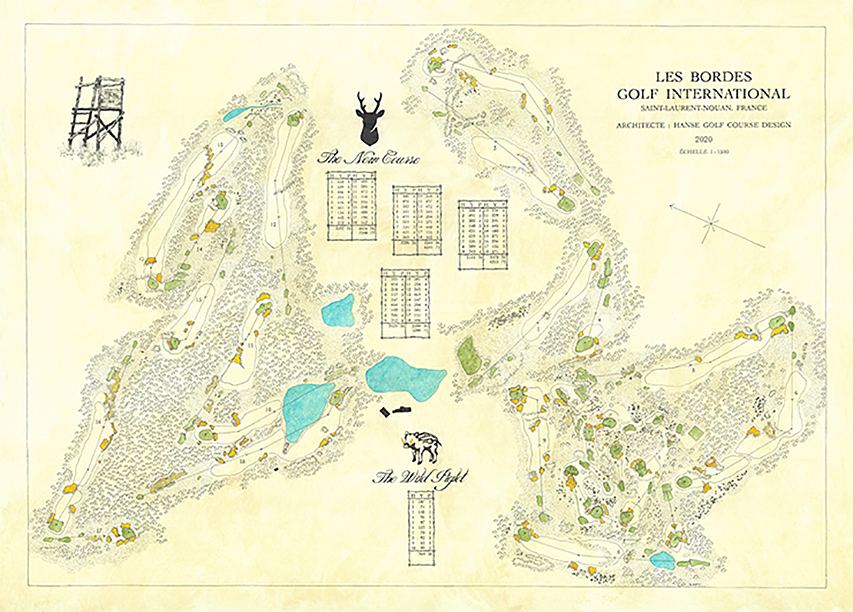 “I think that is what’s going to make Les Bordes one of the most wonderful golf destinations in the world, you have two distinctly different golf courses from two different eras but the quality of them is equivalent in how they were created and how they are presented.”

The New Course features large, dramatic bunkering and green complexes that are challenging but fair. Like the Old Course, there’s most definitely a wow factor as you stand on many tees and prepare to begin a hole. Visually, both courses are stunning.

The 14th Hole On The New Course

Hanse became a Les Bordes resident during construction of the New Course. “Gil lived with us on the estate for over three months while the construction was happening and was incredibly hands-on,” says Jack Laws, director of golf at Les Bordes.

“He would wake up at 6 a.m., have a croissant and coffee in the clubhouse and then start his days on the bulldozer at seven and would be shaping all day until darkness fell. He did this six days a week and his team were just as thorough.

“The course has heathland features but it’s built on sand and has large waste areas like Pine Valley (where Hanse is a member) and, in this respect, is a unique style for Europe. It is an outstanding golf course with truly exceptional architecture.” 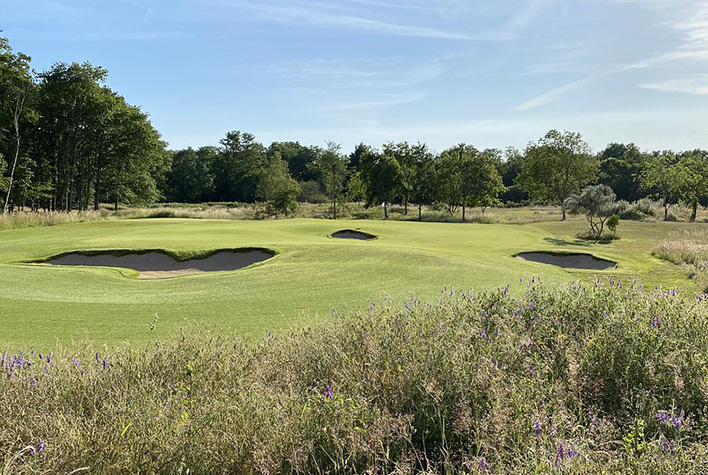 The Wild Piglet par 3 course is quite simply 10 holes of pure fun. The holes range from 57 to 148 yards and feature names like Cry Baby, Doughnut (which has a bunker in the middle of the green), Plain Jane, Blazing Saddles, Rolling Stone and Baquette. Golf.com has already rated Wild Piglet as one of the top 25 par 3 courses in the world.

The Les Bordes clubhouse and 24 member cottages recently underwent a redesign. Featuring dramatic high ceilings, exposed beams and rustic, limestone flooring, the focal point of the clubhouse is a huge roaring fireplace where members and guests gather for post-round cocktails. The food is outstanding. This is France, after all.

While golf will remain the heart and soul of the property, its new owners are adding many new amenities to give Les Bordes more of a community feel. A natural swimming lake, surrounded by a white sandy beach, has been created. 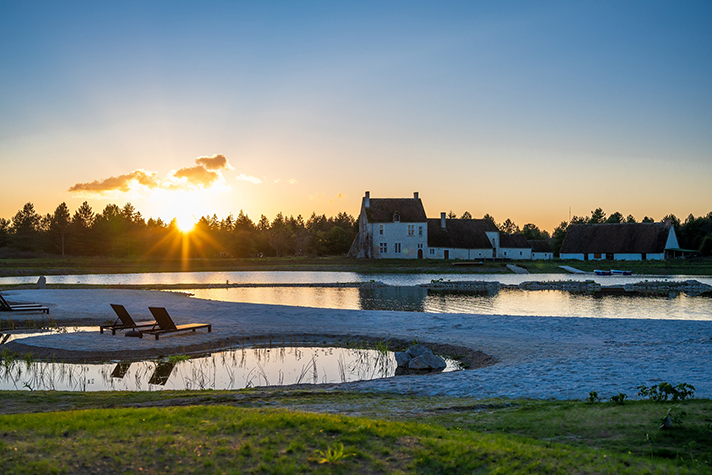 A Natural Swimming Lake, Surrounded By A White Sandy Beach, Has Been Created On Site

There is a country club that features horseback riding, a petting zoo, tennis courts, go-karts, archery, zip-lines and a gym. Bike and walking trails wind through the gated property, where you will spot red deer and the occasional wild boar.

A grand 19th-century chateau on the property, once the home of Baron Bich, is to become part of a planned 88-room Six Senses resort. The Loire Valley is world renowned for its famous chateaux and picturesque French villages. Chambord Castle is located about 20 minutes from Les Bordes. It was created by King Francois I and construction started in 1519.

The Les Bordes members come from all over the world and belong to other renowned clubs like Pine Valley, Merion, Riviera, Sunningdale, Royal St. George’s, Friar’s Head and Royal Melbourne. Some of them are purchasing the new Cour de Baron Residences that are now being marketed at Les Bordes. If you have ever dreamed about having a second or third home in the French countryside, here is your opportunity.

The homes, which will not border any of the golf courses, are a collaboration of two of London’s pre-eminent design houses, Michaelis Boyd and Morpheus & Co. Two- to six-bedroom homes, available in three distinct exterior styles -- traditional, contemporary or classical --are being offered. Some come with their own infinity pools. These will be high-end homes with all the bells and whistles. Prices start at about $1.35 million Cdn, which will buy you a two-bedroom condo in Vancouver’s Yaletown. 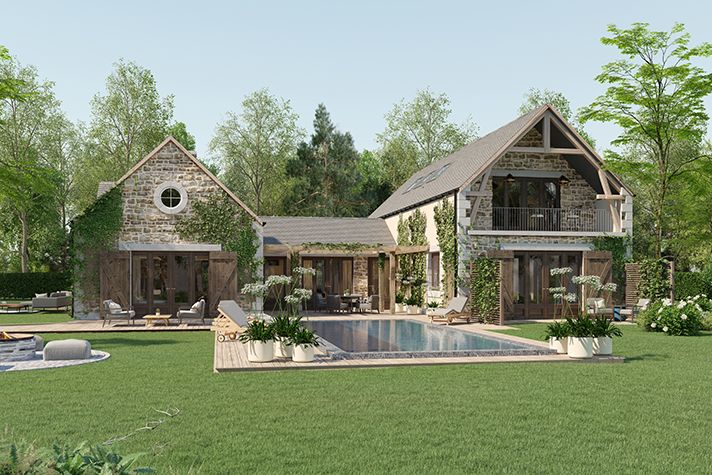 Two- To Six-Bedroom Homes, Available In Three Distinct Exterior Styles -- Traditional, Contemporary Or Classical -- Are Being Offered. Some Come With Their Own Infinity Pools

Many of the new members Les Bordes hopes to add figure to be future home-owners, although GM Sautenet stressed that purchasing a home at Les Bordes does not guarantee membership in the golf club, which is a separate entity. Members must vote to accept new members.

Sautenet has been at Les Bordes since 1988 and she, more than anyone, has come to appreciate what she calls the special feel of the club. She is confident that vibe will remain as the club expands in the years ahead.

“There is something special here that you have to feel,” she says. “It is very difficult to describe because it is much more than what we can talk about. I have been here more than 30 years and I have that feeling every morning.”

About one-quarter of Les Bordes members are Americans, another 30 per cent are British, with the remainder from France and the rest of the world. There are currently no Canadian members.
“I hope that changes soon,” Sautenet says. “We would love to have some Canadians join us. Having members from all around the world is part of the experience here.”