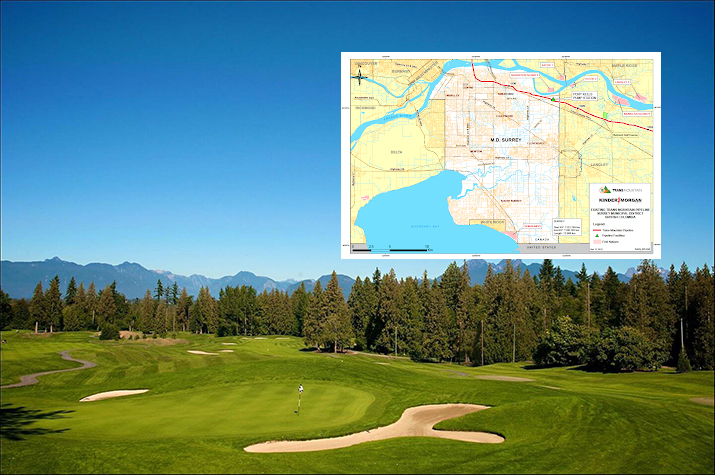 The expansion of the Trans Mountain Pipeline will have a profound impact on a pair of Fraser Valley golf courses next year.

One of them, Redwoods in Langley, plans to close for part of the 2022 season, while the other, Ledgeview in Abbotsford, hopes to reconfigure part of its layout and remain open.

“It goes right down the middle of our course,” Redwoods managing director Doug Hawley says of the pipeline. “Basically, it kind of ties our hands.” Hawley doesn’t yet know exactly when pipeline work will begin at Redwoods or how long it will take.

“We are trying to get that confirmed with them now,” he said. “But it will definitely run into the 2022 golf season. As soon as we know we’ll post it so everyone will know what is happening.”

Hawley cited one positive that will come out of the forced closure of the course. “The only good thing is when we re-open we’ll just be in beautiful shape,” he said. “We’ll do some other course improvements at the same time.”

Over at Ledgeview, General Manager Brad Clapp is determined to keep 18 holes in play during pipeline construction. “We are doing something different,” Clapp said. “We are not shutting down. We worked out an agreement as far as re-routing with Trans Mountain.”

Some of the holes won’t look the same. The par 5 fifth hole, for example, will be turned into two holes -- a par 4 and a short par 3. The 12th and 15th holes will be closed during construction. “We were able to build a 100-yard temporary hole,” Clapp said.

“Long-term, once Trans Mountain is gone, it becomes a brand new 100-yard short-game facility. We also have a very substantial reclamation project planned to make the golf course better than what it was and an opportunity improve the areas the pipeline does go through.”

The pipeline will also run through Belmont Golf Course in Langley. But plans call for the pipeline to go underneath the golf course. “My understanding is that it won’t interfere with play at Belmont,” said Troy Peverley, vice president of the West Coast Golf Group.