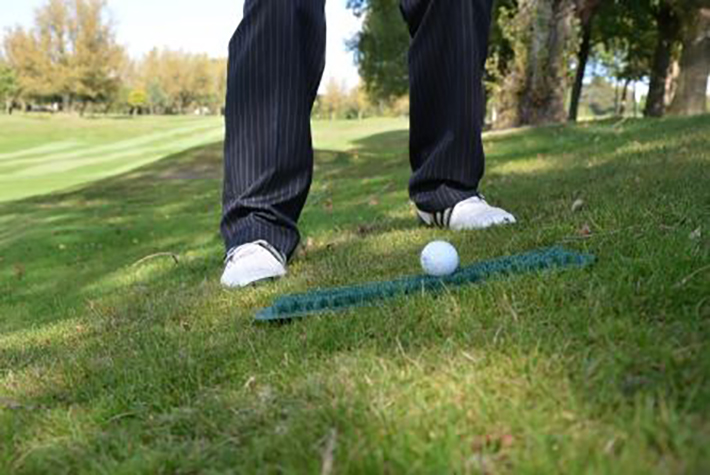 We are blessed in some parts of British Columbia to be able to play golf year-round. But let’s be honest about it, the courses we play on many of those dreary December and January days are often more than a little wet.

Hands up everyone who hasn’t received a face full of mud after striking an iron a little fat off a soggy lie. The golf courses also take a beating during winter play as fairways become scarred with divots that won’t grow back.  Some Victoria-area courses have come up with a solution.

Cordova Bay and Olympic View are requiring players to play with specially designed mini mats on fairways. Players are guaranteed a perfect lie and the courses are saved the wear and tear of divots at a time of year when the grass doesn’t grow. It’s a win-win.

Jim Goddard, the longtime head professional at Cordova Bay, stumbled upon the idea on a golf trip to Ireland a couple of years ago. “I discovered these at Royal County Down, which is always ranked one of the best courses in the world,” Goddard said.

“So a lightbulb went on. Our golf course is really busy and of course in B.C. it’s really wet and divots don’t regenerate, so we instituted it last year.”

Some players were skeptical, but Goddard said once they tried the mats they quickly became converts. “There were a few people saying, ‘we could never do that,’ but by the time we got to the end of the winter we had to pull them out of their hands,” he said.

Olympic View introduced the mats this winter and course superintendent T-Jay Creamer said members and guests love them. “The biggest thing for us was the immediate benefit of being able to play through the winter,” Creamer said.

“There have been a couple of days already where we would have been closed because the course was too wet with overnight rains. But because we had the mats you could play off the mats on the fairways. The feedback we have received so far has been really, really good. Members and guests tell us they get that consistent lie. You don’t have to worry about getting slapped in the face with mud.”

Both courses require all players to use the mats when hitting shots from the fairway and tee shots with irons on par 3s. Players pick them up on the first tee and hand them in when they complete their rounds. The mats, which are about six inches wide and 15 inches long, can be secured to the ground with a tee, but Goddard said that really isn’t necessary. “You get a perfect lie on every shot,” Goddard said.

The mats are two-sided, with a rough side mimicking a typical fairway lie and a smooth side underneath. “The smooth side is really good for wedges, the ball spins,” Goddard said.
Gorge Vale Golf Club in Victoria has also introduced the mats. It requires them on its driving range but they remain optional on the course for members.

Arora, who won the 2020 B.C. Junior Girls Championship, has committed to play her collegiate golf at Indiana University beginning next fall. Vancouver’s Michelle Liu, the 2020 B.C. Women’s Amateur champion, tied for 11th at three-over par after closing with a four-under 67 to match the day’s best score. Vancouver’s Vanessa Zhang tied for 41st at 14-over par. Nicole Gal of Oakville, Ont., the 2021 Canadian Junior Girls champion, tied for fifth.

MEMBERSHIP DRIVE: The B.C. Golf House Society has begun its 2022 membership drive. The Golf Museum, located on the grounds of University Golf Club in Vancouver, relies on memberships and donations to do its great work preserving British Columbia’s rich golfing history. Annual individual memberships are $25. Cheques can be made to B.C. Golf House Society, 2545 Blanca St., Vancouver, B.C. V6R4N1 or visit bcgolfhouse.com. Mike Riste, Golf Museum curator, is optimistic that the society will be able to hold its 2022 Tradition Golf Classic and 2022 Golf Hall of Fame Induction Dinner.