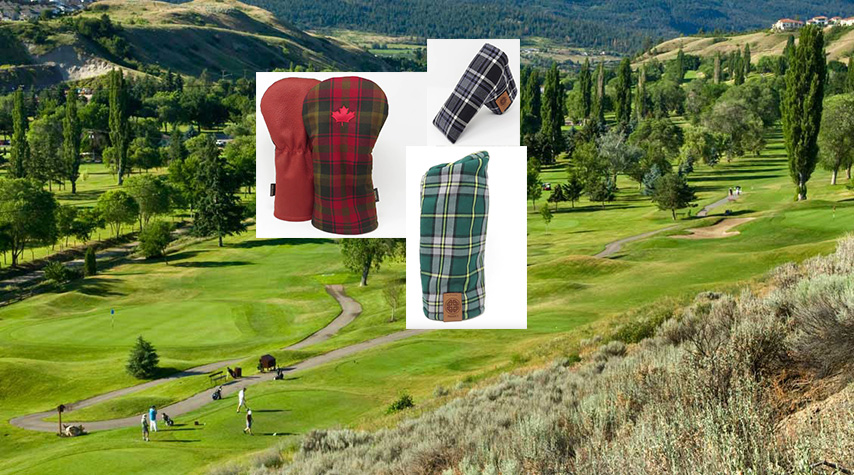 Vernon residents Henry and Sandra Goy started Maggie’s Celtic Golf Collection about five years ago. Recently retired and both avid golfers, the couple was looking for something to do during the off-season. “How it started is kind of an interesting story,” Henry says.

“My wife couldn’t find head covers she liked so we just said, okay, why don’t we see what we can do. We started dabbling with provincial tartans. We graduated from that to getting into clan tartans as well. We are retired and we love to play golf and this gave us something to do in the off-season.”

Plaid for Dad tartan items will include ties and scarves, essentials pouches, driver and putter head covers. Ten percent of all proceeds will be donated to the Canadian Cancer society and Maggie’s has pledged a minimum $5,000 donation. Prostate cancer is the most commonly diagnosed cancer among Canadian men and that motivated the Goys to get involved in trying to raise money.

“I lost a friend to it when I lived in Winnipeg and when I lived in Calgary I had a friend who had surgery,” Henry says. “I have another friend here who I play golf with on a regular basis, who is battling it. From our perspective, it was a close connection. “Golf provides a tremendous opportunity to spread the message and express one’s ongoing support to prostate cancer awareness and research efforts.

"Golfers sporting the exclusive golf club head cover or putter cover or essentials pouch while out on the golf course would be ongoing acknowledgement of support to prostate cancer awareness and helping to raise funds that will make a difference in the lives of men affected by prostate cancer.”

After knocking on many pro shop doors with limited success in the early days of their business, Maggie’s took its business online and that has boosted sales. “The online business generated some sales for us right across Canada so we can honestly say we have sold coast to coast,” Henry says.

Head covers are the big seller and come in two styles -- the more traditional keyhole style and the pipe style, which is more like a tube. The name Maggie’s is testament to Sandra’s Scottish roots. Her middle name is Margaret and she had a couple of aunts named Maggie. “We talk about the tartans being a link to Scotland and Scotland being the home of golf, so there’s a connection there,” Sandra says.

All of Maggie’s products can be viewed on the company’s website, maggiescelticgolf.com. Information on the Canadian Cancer Society’s Plaid for Dad campaign can be found at plaidfordad.ca.

TOUGH FINISH: Abbotsford’s Adam Hadwin had a wonderful start to the WM Phoenix Open, but a disappointing finish. Hadwin began the final round tied for seventh and just three shots out of the lead, but a three-over 74 on Sunday dropped him into a tie for 26th at eight-under par. That was eight shots behind winner Scottie Scheffler, who beat Patrick Cantlay in a playoff.

Hadwin earned $58,639 and moved up three spots to 59th on the FedEx Cup points list. Abbotsford’s Nick Taylor and Roger Sloan of Merritt both missed the cut in Phoenix. The PGA TOUR heads to Los Angeles for this week’s Genesis Invitational at Riviera Country Club, where Hadwin and Sloan are both in the field.

WIN NO. 5 FOR EWART: Coquitlam’s A.J. Ewart kicked off Barry University’s spring golf season with another win. Ewart shot rounds of 67, 67 and 70 to win the Matlock Classic in Lakeland, Fla. by five shots and lead Barry to the team title. Ewart, a junior at Barry, now has five individual college titles. Barry, located in southern Florida, is the top-ranked NCAA Division II school in GolfStat’s latest team rankings. Ewart is third in individual rankings. 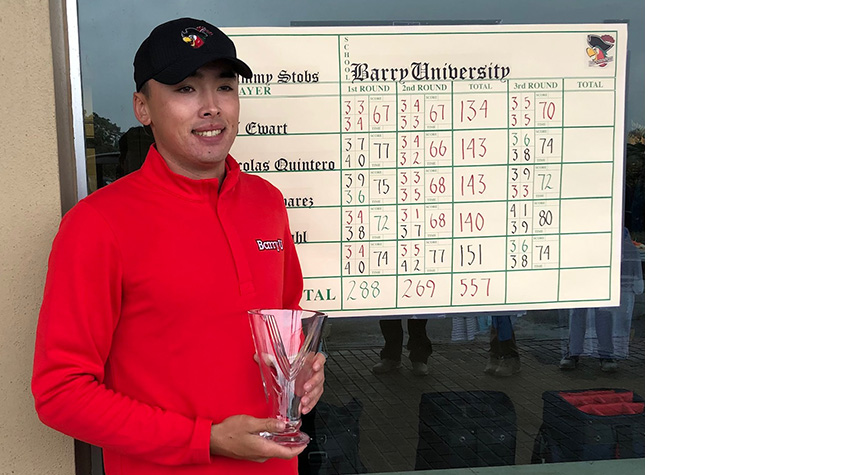 TEAM TITLE: Kaleb Gorbahn of Smithers teamed with Grant Booth of Scottsdale, Ariz. to win the Outlaw Tour’s Pard’ner Shootout in Phoenix. The 36-hole event was played at Grand Canyon University Golf Course and featured a scramble in the first round and modified best ball called ‘Beast Ball’ in the second round. Gorbahn and Booth won the event in a playoff after finishing regulation play at 26-under. They each made $3,000. Kimberley’s Jared du Toit and partner Wil Bateman of Edmonton tied for sixth.

BACK FROM BREAK: The PGA Tour Latinoamerica circuit resumes its season this week with the Estrella del Mar Open in Mazatlan, Mexico. Coquitlam’s Henry Lee is in the field. Richmond’s Ziggy Nathu was listed as first alternate and should have a good chance of drawing into the field. The tour began its new season with two events in Argentina and Chile in early December.

ROUTE 66: Lawren Rowe’s five-under 66 was good for a three-shot win at a Vancouver Golf Tour event at Mayfair Lakes in Richmond. Rowe, a University of Victoria graduate who now plays out of Squamish Valley Golf Club, had seven birdies in his round. Marine Drive’s Scott Kerr was second. Lucy Lin topped the amateur side of the draw with a three-under 69.

CHIP SHOTS: Best wishes to Eric MacKenzie, who has left his job as manager of communications and marketing with the PGA of BC to pursue a new career opportunity in communications with the YMCA of Greater Vancouver. . .Vancouver’s Stuart Macdonald missed the cut by one shot at the Korn Ferry Tour’s Astara Golf Championship in Bogota, Colombia. The Korn Ferry Tour heads to Lakewood Beach, Fla., for this week’s LECOM Suncoast Classic. . .Richmond’s Chris Crisologo caddied for Monday qualifier Étienne Papineau of St-Jean-sur-Richelieu, Que., at the Phoenix Open. Papineau fired two rounds of 73 and missed the cut in what was his first PGA TOUR start.