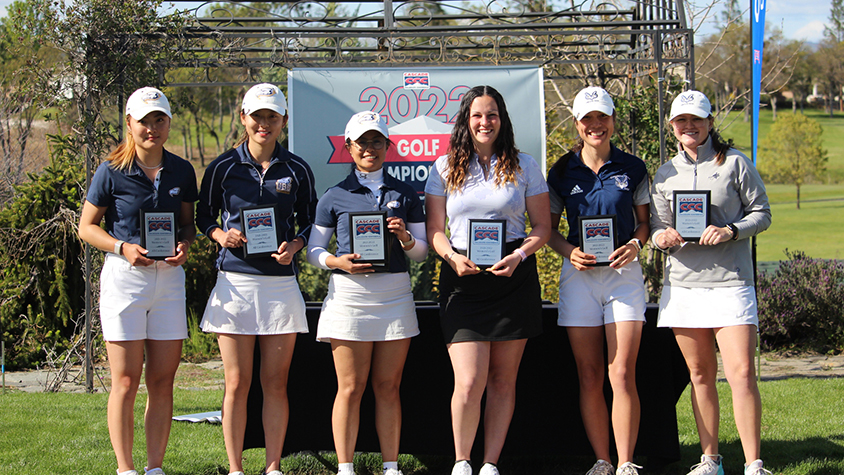 It would have been easy for the UBC Thunderbirds to be a little upset with their No. 3 ranking heading into the upcoming NAIA Women’s Golf Championships in Oklahoma City.

All the Thunderbirds have done this season is win all 10 events they played in. What does a team have to do to be No. 1?

The Thunderbirds have decided to take the high road and let their clubs do the talking. The team’s attitude, quite simply, is we’ll show you how good we are.

“I like going in as underdogs,” says first-year player Grace Bell. “No one really expects too much from us. The pressure is on (No. 1-ranked) Oklahoma City. It is their home course, they are ranked No. 1. So we get to come in as the underdog. I am excited about that.”

The Thunderbirds have put together this remarkable undefeated season despite the fact they are a young team. Very young. Seven of the nine players on the squad are freshmen. But with the help of their elder stateswoman — fifth-year player Shania Remandaban — head coach Chris Macdonald and assistant coach Keri Moffat have molded a squad that is fiercely competitive and whose members play for the team, not themselves.

“I think we are very like-minded, it is a very competitive team to be on,” says Remandaban. “I think Chris did a really good job throughout the season of making us fight and qualify for every event, so when we were beating each other, when we were losing to each other, we learned to have no hard feelings. Every time we got a spot on the team we knew we deserved it and every time we didn’t get a spot on the travelling team we knew we had to work harder to deserve it.

It will be Remandaban and four rookies — Bell, Elizabeth Labbe, Sonja Tang and Emily Li — playing May 24-27 at the NAIA nationals. Another first-year player, Una Chou, will travel to the nationals as the alternate. Bell, a business major from Calgary, didn’t quite know what to expect when she joined the team last fall. She credits much of the team’s success to the fact that everyone gets along and supports one another.

“We are one big happy family and when one girl is not doing so well, the rest of us know to pick it up,” Bell says. “It’s just a constant checking in with one another and making sure practice is fun, making sure competing is still fun, and school is not too stressful. It’s like you are playing with your best friends and we have got some good results, so just building off that momentum has been really cool.”

Macdonald, the longtime and highly successful coach of the men’s and women’s golf teams at UBC, likes the energy and spirit of his women’s team. “They are all very different in the way they play, but they are all fierce competitors,” Macdonald says.

“They love to play, they love to compete together. I think that is what separates this group. Sonja just works so hard, Grace is such a combative player, Elizabeth kind of slides under the radar, but can shoot 68 on you. It’s just a very unique group, they are very different, but their skill sets really match well and their personalties match well, so they have fun as well. I think they just enjoy the challenge of trying to win every tournament. They don’t like to lose.”

No matter what happens in Oklahoma City, Macdonald knows the team has a bright future. “We have all the ingredients on this team for the next few years that will challenge for these kinds of championships,” he says.
The 72-hole tournament will be played at Lincoln Park West Golf Course in Oklahoma City. It’s the same course the UBC women won their last NAIA title on in 2019.

“It’s a tricky course,” says Remandaban, who was part of that 2019 championship team. “It’s good that we are getting three practice rounds in. There are definitely lines that are really uncomfortable to take off the tee, but we are going to be taking them. It is a good ball-striker’s course. The greens are massive and undulating and what really protects the greens are the protection areas. It’s super easy to short-side yourself on the course.”

And this being Oklahoma, the players know the wind will be blowing. It’s only a question of how hard. There will, of course, be butterflies and Remandaban hopes to use the experience she gained at two previous nationals to help prepare and calm down her teammates. “Just recalling my very first national in Florida, it was kind of similar,” she says.

“We were a really good team, we were really together, but when we got to the national stage — and I think we took three rookies that year — we didn’t realize the magnitude of what we would be feeling over each shot and how much each shot was worth. Now that I am going to my third national, I have more of an understanding how heavy each shot will weigh on each player, so I will be there to tell them to take it seriously and be ready for it.”

Remandaban, a Coquitlam native, would love to finish her career with another NAIA championship. “I would love to graduate with a national title and I am really looking forward to it. I think we have a really good fighting chance at it if I am being really honest. I’ve seen the caliber of golf on this team and it’s really good.”

CHIP SHOTS: The University of Victoria also has a spot in the NAIA field. Coach Justin Clews’ squad is expected to include Rhiannon Jones, Nicole Gargarella, Sukriti Harjai, Melanie Murchison and Quinn Fitzgerald. The Vikings head into the tournament unseeded. . .Following the NAIA Championships, UBC and Victoria will be heading to the Canadian University/College Championship, which goes June 1-4 in Bromont, Que.