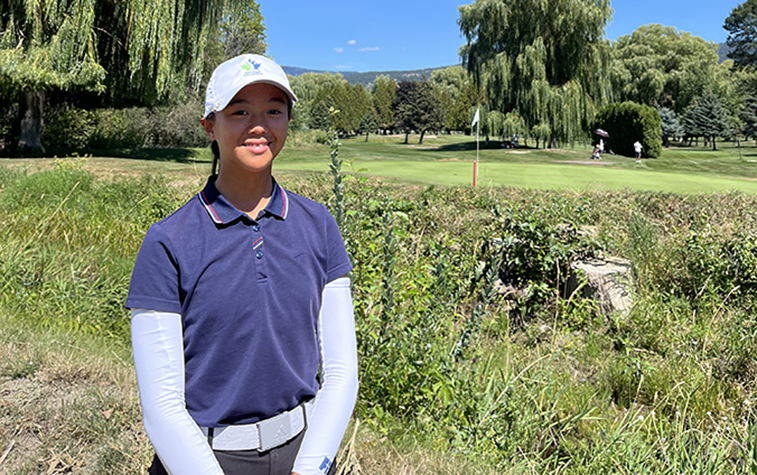 Rose Zhiyan Chen had a feeling it might be her day when she chipped in for birdie on her first hole at the B.C. Bantam Girls Championship at Shadow Ridge Golf Club in Kelowna.

Not that the 13-year-old Langley resident was standing over the shot feeling particularly confident about pulling it off. “No, I was standing over my ball thinking how to not screw up this chip,” she said with a laugh.

That was the first of five birdies in a round of two-under 70 that gave Chen a three-shot lead in the tournament for players aged 14 and under. Chen’s other four birdies were more of the routine variety.

“I two-putted for birdie on one of the par 5s and the others were like five or six feet,” said Chen, who is heading into Grade 8 at Walnut Grove Secondary. Chen, who plays out of Meadow Gardens Golf Club in Pitt Meadows, didn’t quite know what to expect from her game heading into the tournament. “The tournament before this one I screwed up pretty badly, so I didn’t have a lot of confidence,” she said.

“My overall game was pretty solid today and I didn’t make that many mistakes. Some of the par 5s are set up fairly short, so I was able to reach them in two.” She thinks one of the keys to success at Shadow Ridge is being able to hit the course’s relatively small greens with approach shots.

“I think your iron play is really important here because the greens are small, so once you get it on the green it’s pretty hard to three-putt. Also, the fairways are quite tight, so the driver is important, too. There are a lot of doglegs, so it is important to know where to aim so you have a good second shot.”

Jenny Kwon of Vancouver and Zhehui Yu of Burnaby are tied for second at one-over par heading into the final round of the 36-hole championship. Chen knows she’ll have to battle some nerves as she tries to win her first provincial championship.

“Right now, I am feeling pretty good, but I’m not sure how I will be feeling tomorrow because it’s hard being in the lead knowing that you have a chance to win, but if you screw up your opponent might catch up,” she said. “So my mental game will also be important.”

The B.C. Bantam Boys Championship is also being played at Shadow Ridge. Sukhraj Gill of Surrey leads after opening with a one-under 70. Gil, a 14-year-old who plays out of Hazelmere Golf Course, had four birdies in his round.

Arav Pabla of Victoria is one shot back after his even-par 71. Pabla, who plays out of Bear Mountain, recovered nicely from a triple-bogey on his ninth hole and shot 32 on his back nine.

A Novice championship is also being held for players aged 12 and under. Elsa Wu of Maple Ridge leads the Novice Girls competition after firing a nine-over 81. Vancouver’s Grace Fan is second at 11-over. Lucas Lin of West Vancouver opened with a two-over 73 and leads the Novice Boys championship by two shots over Lucas Vizzutti of Powell River.

Click HERE for complete first round scoring from the BC Bantam & Novice Championships.