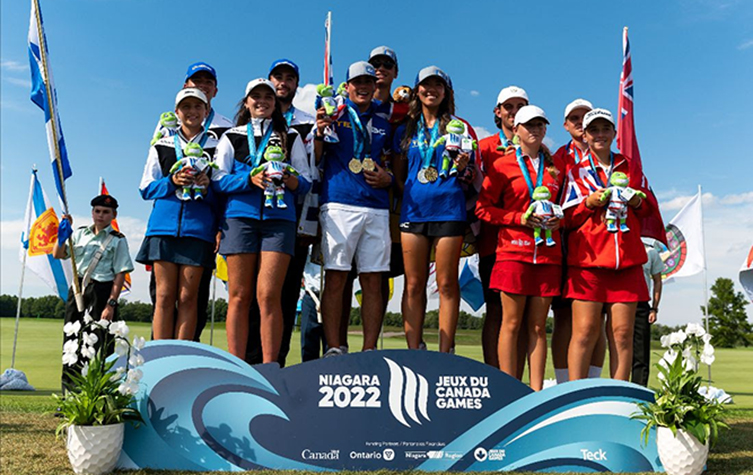 Solid gold. That would be an apt description of British Columbia’s performance at the Canada Summer Games golf competition.

B.C. swept both individual titles and also won the mixed team competition at the Summer Games in the Niagara region of southern Ontario. Tina Jiang of Richmond won the female competition and Vernon’s Cooper Humphreys was the winner on the male side.

Jiang won in impressive fashion as the 17-year-old closed with rounds of 66 — a course record at Legends on the Niagara Battlefield Course — and 67 to beat teammate Kim by three shots.

Jiang won with a score of 14-under par. She only made one bogey the final two days and it came on the 72nd hole when it really didn’t matter.

“My swing just seemed to click the last two days,” Jiang said. “I hit 16 greens (in regulation) today and 17 greens yesterday. So it was a lot of fairway, green, fairway, green and easy pars.”
And birdies. Lots and lots of birdies.

“The course was wide open and I kind of just bombed my drives down the middle,” Jiang said. “I just swung at it and I was hitting it a long way this week, which probably really helped my score.”

Jiang said the team format also helped relieve some of the pressure as she battled Kim for the individual gold. “I think the team format helped me play better because I wasn’t under too much pressure,” she said. “I didn’t put too much pressure on myself. I think it helped me play better, for sure. And I didn’t really care too much because as long as one of us wins it was great.”

Jiang and Kim began the day tied for the lead, but Jiang birdied three of her first six holes in the final round and cruised to the win. Humphreys didn’t secure his gold until the final hole and had to make a great up-and-down for par on the 18th green to seal it. “I made an okay tee shot, but I blocked a five-iron to this crazy short side spot in the bunker,” Humphreys said. 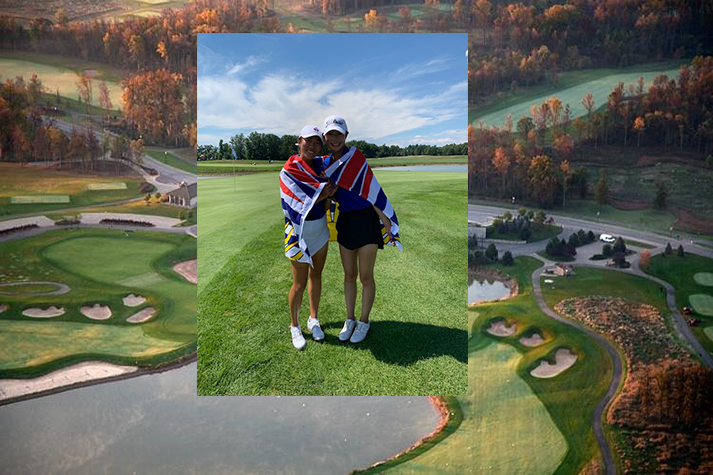 “My ball was only a foot into the bunker, so I had one foot in the bunker, the other foot out of the bunker and then I hit this little chunk and run that landed short and ran up to four feet and I made the putt.”

Humphreys closed with a two-under 70 to finish the event at 11-under par, one shot better than Quebec’s Guillaume Paquette. Posthumus finished seventh at even-par. Humphreys, who is heading into Grade 12, loved being part of the B.C. team and thoroughly enjoyed his Canada Games experience. “I found it fun, just being out around the team and watching all the other sports was awesome,” Humphreys said. “And our team was awesome and the coaches were amazing. It was super fun.”

University of B.C. golf coach Chris Macdonald coached the B.C. team at the Summer Games and was especially delighted to earn the team gold medal. “That is really why we came here to get that team championship where everyone gets a gold,” Macdonald said.

Macdonald was pleased with the way the four members of the B.C. squad jelled and rooted for one another. “They are very skilled players, but I think some of the highlights for me was watching how they interacted with the Special Olympians who were here,” Macdonald said. “They are just really good kids. I was really impressed by them and I think B.C. has a lot to be proud of on that side.

“Cooper has always got a smile on his face and Lauren is a competitor and is a lot of fun. They are such unique personalities, but it was fun to bring that together. We tried to create the team culture early and I think they really bought into that and it just made for a really fun week together. We did a lot of fun things. Most importantly, they had a great time.”

Macdonald said team manager Michelle McCann of Uplands Golf Club in Victoria played a huge role in the B.C. team’s success. “She helped organize things and was able to follow the players and keep me up to date with what was going on so I could move to where I needed to be,” Macdonald said “She served a very, very helpful role.”

Click HERE for complete final scoring from golf at the Canada Summer Games.