The Maturation Of Nick Taylor Into A PGA TOUR Winner 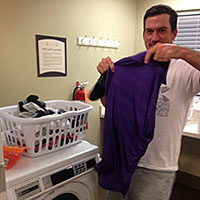 Five years after he burst onto the national golf scene, Nick Taylor was still worrying about one thing: laundry.

His first PGA TOUR victory comes with a $720,000 first-place cheque, a two-year exemption on the PGA TOUR and exemptions into the PGA Championship at Whistling Straits next August and the Players Championship at Sawgrass next May.

(But not The Masters in April, because there was a competing WGC event in China last week).

You may remember Taylor from his summer 2009 run when he was the world’s number 1-ranked amateur for 20 weeks, he was coming off a runner-up finish at the 2008 NCAA Division I men’s golf championship and he was the low amateur at the U.S. Open at Bethpage Black after a second-round 65 played alongside teenage phenom Rory McIlroy.

So where does laundry fit into the picture?

Taylor’s roommate on the PGA TOUR road is Adam Hadwin and Hadwin, who isn’t having too shabby a rookie season with $168,803 cashed already, took the time to post a picture of Taylor on Sunday night.

Taylor wasn’t drinking a massive bottle of champagne, carousing at a nightclub or doing what you might expect a 26-year-old with $720,000 in his wallet could be doing. He was folding laundry.

Why do I find this amusing? Well, I covered Nick and his thrilling 2009 U.S. Open run on Long Island and the picture of a smiling Taylor with his clean laundry brought back great memories of exactly that same situation at Bethpage.

Because of all the rain and a Monday finish at Bethpage, Taylor had gone through his entire selection of golf shirts. All he had left was his Team Canada gear, which didn’t exactly go with his purple University of Washington golf bag, but that’s what he sported for the awards ceremony where he received his medal for low amateur.

“Ran out (of golf shirts),” Taylor said that June day. “Needed to do some laundry. Being here for 10 days, not enough shirts.” I can still see the Taylor family loading up all of Nick’s gear in their rental SUV for the week and yes, there was nothing but dirty laundry in the back.

That’s the Nick Taylor his parents Jay and Darlene raised and it’s hard to find somebody who isn’t happy for the entire Taylor family after Sunday’s win in Mississippi.

Older brother Josh also went to Twitter to post a shot of the two of them with McIlroy at Bethpage with the funny comment “I told you @McIlroyRory”. 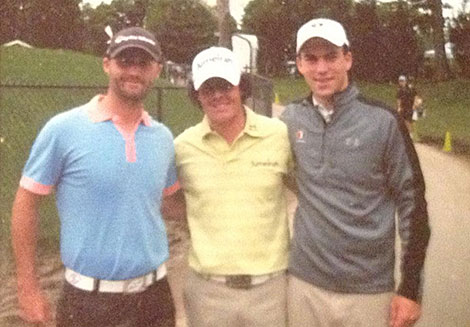 Coach Rob Houlding followed Taylor’s progress from South Surrey, talking with Taylor after each round and after Taylor’s win, cracking open a bottle of champagne and toasting his student as a “Great guy, great golfer, great future.”

Vancouver Golf Tour Commissioner Fraser Mulholland spent most of Sunday watching online and television coverage of Taylor and seeing Taylor win has validated Mulholland’s creation of the Vancouver Golf Tour to give young golf professionals more local playing opportunities where they can hone their competitive skills.

Mulholland got the most comprehensive post-round interview with Taylor (also posted on the Inside Golf website), but here’s the snippet that resonates.

“So many people on the way here have helped. And I wouldn’t be here without all of them as building blocks. I’ve been with Matt Thurmond since 2006 when I was at the University of Washington. He’s been such a good mentor to me as a coach, and someone to look up to for many things. I’d say he’s helped me more mentally and keeps me composed.

Rob (Houlding) I’ve met since first year of school and developed a good relationship with him since then. We don’t see as much of each other as we would like (because of tour travel), but our relationship seems to work out just fine as we don’t get to relying on each other and when we do see each other we get things done and it works well.

He’s been such a good help, both supporting me on and off the golf course. I just can’t thank them enough for all they’ve done for me, as without their guidance I wouldn’t be sitting here with my first PGA TOUR win.

“It’s funny, the older you get the more daunting it becomes how much (my parents) sacrificed, not just for me but my brother as well. How much time and money, sacrificing time for you.

My mother had summers off, and I’m sure she would have rather been doing lots of things other than driving us off to golf tournaments all year. They have been the biggest supporters of my golf and I wouldn’t be here without them. They’ve taught me everything.

“It’s a bit ironic that for all the people that have taught me everything and supported me, none of them were able to be with me to share in the excitement of my first win. But I’m looking forward to seeing my wife this week as she’ll come with me down to Mexico.

She has been there for me throughout this whole journey. And I’ll share my experiences with family and friends when I get home after Cancun for sure. There is a long list of people I need to thank for me being here today, all building blocks to my career and I wouldn’t be here without them.”

As for myself, I was madly trying to follow Taylor’s progress from the Hawk’s Nest in Seattle as the Seattle Seahawks dismantled the New York Giants in a driving rainstorm in Seattle.

As my phone updated each hole and Taylor kept his three-stroke lead until a meaningless bogey on the 18th that made his final margin of victory two strokes instead of three, I couldn’t help but think of the polite Abbotsford professional who has now tasted victory on the highest of golf stages.

The same guy whose family invited me for lunch in the player dining area at Bethpage, where superstars like Henrik Stenson and Phil Mickelson came by to sign a flag and congratulate him on his accomplishment.

Six weeks earlier, at Gleneagles in West Vancouver, I was walking down the 7th fairway with Taylor, who had come to a celebration Mulholland had thrown for him and Hadwin.

Both the PGA TOUR rookies had been eliminated from the horse race, but were walking the final holes to cheer on the professionals who had beaten them.

Taylor, as humble as ever, wanted to know how I was doing and whether I’d be covering him this season.

I told him I couldn’t make any of the fall events (pretty stupid decision in hindsight), but I would be in Phoenix, San Diego and Pebble Beach for the three iconic stops on the West Coast Swing of the PGA TOUR in January and February.

Well Mr. Taylor, after your Sunday victory, that won’t be a problem and I’ll be seeing you in Phoenix, San Diego and Pebble Beach very soon.