Naomi Ko of Victoria has been nominated for the Sport BC Junior Female Athlete of the Year Award.

Ko, who was recently named the Pacific Northwest Golf Association Women’s Junior Girls’ award winner, will find out at the Sport BC Athletes of the Year Awards on March 12, 2015 whether she’s adding another honour to her name.

The gala event is the longest standing provincial sports award program in Canada to recognize the accomplishments of amateur athletes, coaches and officials.

The 17-year-old Ko has had a stellar 2014, which included winning the BC Junior Girls’ Amateur Championship and finishing runner-up at the BC Juvenile Girls’ Championship. 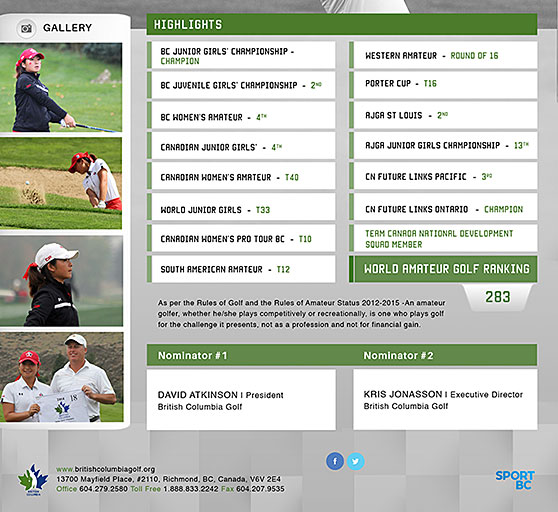 Internationally, Ko finished T12 in the South American Amateur, T33 in the World Junior Girls, T16 in the Porter Cup and reached the round-of-16 in the Western Amateur.

She is a member at Royal Colwood Golf Club in Victoria,  a Team Canada Development Team member and has a World Amateur Golf Ranking of 283.

The 2014 winner was track and field athlete Georgia Ellenwood of Langley.