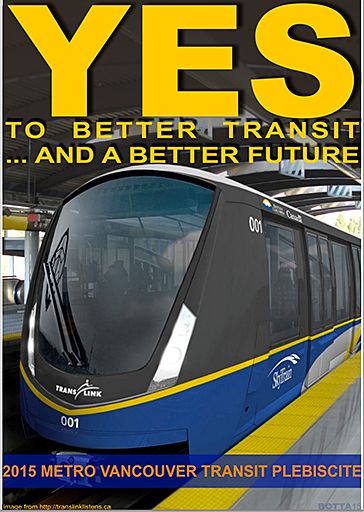 British Columbia Golf announced today that is has taken the pledge, and joined “The Better Transit and Transportation Coalition”.

David Atkinson, President of British Columbia Golf stated, “All our research indicates that golfers would play more golf if they had more time.

It makes sense for British Columbia Golf to support the coalition, and encourage a 'Yes' vote as the Lower Mainland is expected to grow substantially and congestion is already an issue."

We will encourage golfers to review the Mayor's Council Regional Transportation Investment Plan and Vision, and when they understand the scope of the plan they will appreciate it will save 30 to 45 minutes commute time when fully completed.”

In joining the coalition, British Columbia Golf pledged support for the following statement:

One of the most important decisions facing Metro Vancouver for the next generation is the 2015 Referendum on transit, transportation, and goods and people movement. A positive outcome is a crucial step to expand transportation options, reduce pollution, improve the health of our communities, strengthen our economy, and help make this region a more affordable place to live. The Better Transit and Transportation Coalition (BTTC) is the largest, most diverse coalition in BC history. Leaders representing labour, business, environment and students are among the membership in the coalition.

About the BTTC: The Better Transit and Transportation Coalition is a new coalition — the biggest, most diverse ever in B.C. — supporting the Metro Vancouver Mayors’ Council Plan to dramatically improve transit and transportation in our region. The BTTC has more than 65 organizational supporters representing more than 250,000 Metro Vancouver residents, including organizations from business, labour, environment, student, community, health and other groups.

Iain Black is president and CEO of the Vancouver Board of Trade. He has been in this role since 2011, leading the organization through fundamental transformation and returning it to increased membership growth, financial health and relevance in the public and business domain. He joined the board after serving six years as an elected MLA and cabinet minister for the government of British Columbia, where his various responsibilities included three cabinet posts encompassing economic development, labour and small business.

Bahareh Jokar is a fifth-year political science student and vice-president external affairs of the Alma Mater Society of UBC Vancouver. She sits as the chair of Get on Board BC and vice-chair of the Alliance of BC Students. Her work focuses on advocating for student issues to different levels of government, while ensuring that students are informed and engaged during elections. Metro Vancouver is home to upwards of 100,000 students.

Gavin McGarrigle is the B.C. Area Director for Unifor and a vice-president and officer at the B.C. Federation of Labour. McGarrigle has represented workers and bargained agreements in many industries, including transit and transportation, with Vancouver’s container truckers, and in aerospace and hospitality. Unifor is Canada’s newest union and largest in the private sector, with more than 305,000 members across the country, working in every major sector of the Canadian economy. The B.C. Federation of Labour represents close to 500,000 members throughout British Columbia and includes many unions representing transit workers, including COPE Local 378, CUPE and BCGEU.

Peter Robinson is the chief executive officer of the David Suzuki Foundation, a non-profit science and education organization working to address some of Canada’s most pressing environmental challenges. He brings to this position a diverse background spanning four decades in business, government and the non-profit sectors. Robinson began his career working as a park ranger in wilderness areas throughout British Columbia, where he was decorated for bravery by the Governor General of Canada. After his park career, he worked at BC Housing, a provincial crown corporation, eventually becoming its CEO. Immediately prior to his appointment as CEO of the David Suzuki Foundation, he was the CEO of Mountain Equipment Co-op.