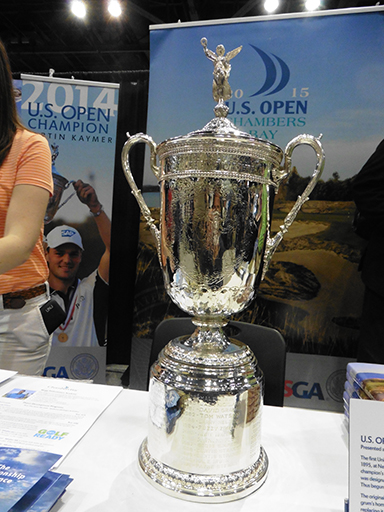 The U.S. Open Trophy Which Will Be Presented To The Winner At Chambers Bay In June Was On Display At The Seattle Golf Show Recently -  Image Credit - Alfie Lau

SEATTLE - The U.S. Open at Chambers Bay is just over three months away and preparations are going along swimmingly.

Larry Gilhuly could not be more clear: The U.S. Open will be played at Chambers Bay in Tacoma, Washington this June.

As the USGA’s Director for the Northwest Region, Gilhuly has been the point man for the Association’s biggest foray into Washington State and with the big event just more than three months away, preparations are coming along very nicely.

Gilhuly told media members at the Seattle Golf Show that a mild winter has allowed the course to have a nice winter grow-in of fescue grass and the City of Tacoma has bent over backwards to help organizers produce a world-class golf course for the best golfers in the world. “Last year, there were 2,000 rounds played on frozen greens and that absolutely annihilated the course,” said Gilhuly.

“(Director of Agronomy) Eric Johnson and (Superintendent) Josh Lewis and their crew have been busting it to get the course back to the condition we want it at.

This year, the city has shut down the golf course for four days a week and bought covers for all the greens so that we can protect the grass on those greens . . . and now we can say that the firmness of the greens is so firm that it’s firmer than what we had two days before the practice rounds (for the U.S. Amateur) in August 2010.

The tournament is so popular that all tournament tickets for the championship days (Thursday to Sunday) are sold out already and all that’s available for regular patrons is practice round tickets for Monday to Wednesday.

The USGA and its Chambers Bay championship committee had a prominent presence at the Seattle Golf Show, bringing along the U.S. Open trophy for attendees to see and get their picture taken with.

Somewhat less promising for the thousands of Canadians who are heading four hours south to Chambers Bay is the news that a previously scheduled train service running from downtown Seattle to an entrance gate by the 17th hole of the course is not going ahead.

Open organizers were informed that the train could only accommodate 1,000 passengers every hour or 90 minutes and that wouldn’t be sufficient to accommodate a marquee group such as one involving Tiger Woods, Phil Mickelson or Rory McIlroy, which would normally see 3,000 or more spectators all wishing to arrive at a specified time.

Instead, most ticketholders will be asked to drive to park-and-ride lots at the Puyallup County Fairgrounds and Fort Steilacoom – both approximately 45 minutes to an hour south of downtown Seattle – and then be shuttled to Chambers Bay.

Another notable development is that with the end of the NFL football season, FOX Sports is now putting more resources toward publicizing the U.S. Open, its first big event under a new $1.2 billion, 12-year television contract with the USGA.

KCPQ-13 FOX Seattle sports anchor Aaron Levine has started a weekly segment where he plays each of the 18 holes at Chambers Bay and has Chambers Bay host professionals point out the intricacies of each hole for the lay public.

The course will have a lot of flexibility for USGA Executive Director Mike Davis, who will be in charge of the course set-up. According to Gilhuly, the course can ply up to 7,900 yards, but will most probably play between 7,200-7,500 yards each day, depending on the wind.

“It’s going to be fun, especially if we get one day of hard wind,” said Gilhuly, who’s most looking forward to the par-3 ninth, which can play from an elevated tee box 120 feet above the green to a par-3 featuring a tee box 5 feet below the green surface.

“I can’t wait to hear the sound of this golf course,” said Gilhuly. “The sound will travel and you add in the sound of passing trains on the final holes and you’ll have a really unforgettable Open.”

For more information, go to www.chambersbaygolf.com/us-open/