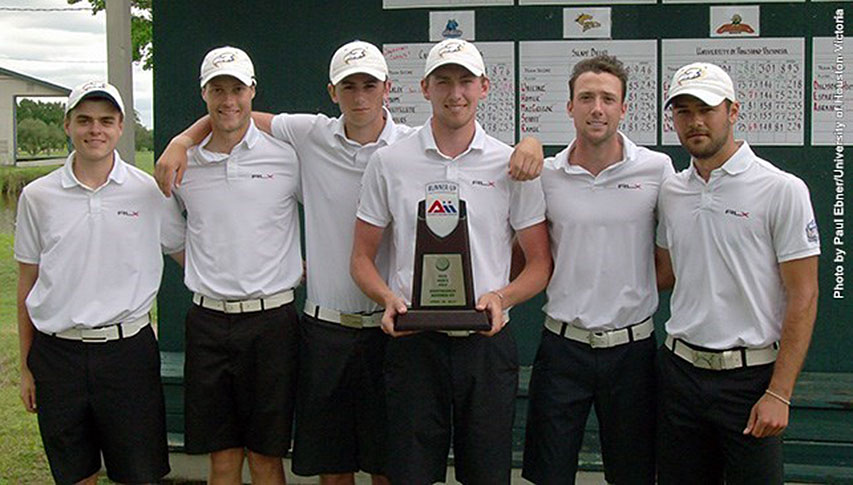 The UBC Thunderbirds men's golf team finished in a tie for second at the Association of Independent Institutions conference championship, Tuesday, April 28, in Victoria, Texas.

After two rounds of 4-over par 292 on Monday, the Thunderbirds recorded a final-round score of 7-over 295 to finish at 15-over 879. California State University-San Marcos won the tournament by three strokes over UBC and Ashford University, which led the event by three going into the final round at the Victoria Country Club.

Scott Secord (Calgary) shot a final-round 1-under 71 to take third place in the individual competition at 1-under 215. The fourth-year senior was one of just three players in the entire tournament to finish under par.

Defending A.I.I. individual medallist Conner Kozak (Vernon, B.C.) and Evan Holmes (Calgary) were both sixth at 4-over 220. Holmes had a 1-over 73 on Tuesday while Kozak shot a 4-over 76.

Rookie Trent Abraham (Hamilton, Ont.) had an impressive postseason debut for UBC. He was playing the A.I.I. event as an individual meaning his scores didn't count towards the Thunderbirds' team result. Abraham finished in ninth, alongside three other golfers, with a score of 6-over 222.

CSU San Marcos earns the A.I.I. berth to the 2015 NAIA Men's Golf National Championship May 19-22 at the LPGA International course in Daytona Beach, Fla. UBC is eligible for an at-large bid based on the NAIA Top 25 rankings. The berths will be announced on May 7.