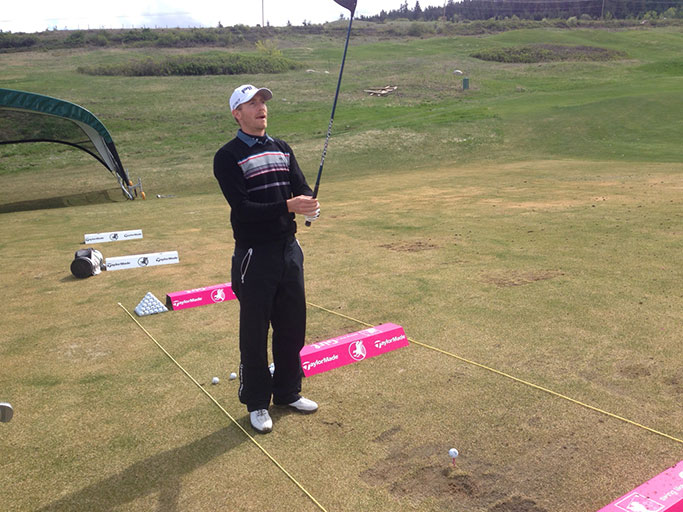 For anybody else, winning the PGA Tour Canada stop in Ottawa, The Forces & Families Open, finishing 13th on the Order of Merit and coming second in the Canada Cup would be a good golf year, but for Summerland’s Greg Machtaler, it was only the tip of the iceberg.

“My back was in rough shape and I really only played half the season with a close-to-healthy back,” said the 31-year-old who now calls Kelowna home. “One of the reasons why I’m looking so forward to 2015 is I’m feeling good, my back is getting close to 100 per cent and I know that if I play like I did at the end of last year, I’ll have a good chance of finishing top-5 here and getting my Web.com card for next year.”

That win in Ottawa, which featured a closing round (-9) round of 62 and a 70-foot snaking winning putt on the 18th hole, wasn’t even Machtaler’s best round of the season, as he also shot 62 in Nova Scotia during the second round on the par-72 track.

Anybody who’s seen Machtaler play knows he’s a very good golfer who can go crazy low when his armlock putting stroke is on. Machtaler is spending a lot of time at Predator Ridge Golf Resort, where he works with teaching professional Brodie Carle.

“We don’t get too technical,” said Machtaler, “but I’ve known Brodie for some time and he knows what to work on with me. We’ve worked together for more than a year and he’ll come out with me to several tournaments this year.”

The relationship between teacher and student is 100 per cent collaborative. For example, Machtaler has played PING woods and irons for some time and recently added the new Ping G30 driver to his arsenal.

But as well as he hits that club, he keeps on going back to his three-year-old Ping G20, which was his favourite weapon in 2013 when he swept a trifecta of club championships, including the PGA of BC Assistants’ Championship in Chilliwack, the PGA of BC Championship in Salmon Arm and the Canada Cup in Quebec.

That Canada Cup triumph is legendary in club professional circles, as Machtaler threw down weekend rounds of 63 and 63 to win going away. Even as Machtaler tries getting the G30 to do what his old G20 does, Carle encourages him to keep both around, to keep working with the new club and defer a final decision until later in May, when Machtaler’s season gets underway.

“I’m a feel player and Brodie knows the feel I’m looking for, not just my driver, but all my clubs,” said Machtaler. “Brodie’s really helped me, as has Dick Zokol.”

Zokol is also part of the Predator Ridge team and with Machtaler now using that as his base, it means the Summerland native has lots of time to work on the mental aspects of golf with a former PGA TOUR winner.

“It’s great being able to talk to him on the mental aspects of the game, how you have to concentrate on the things you can control,” said Machtaler. “I know that when I need anything, Dick is only a cellphone call away.”

The 2014 season was a time when Machtaler was questioning almost everything in his golf game. His wonky back had him wondering how he could continue on, barely making enough money to put gas in his 1988 Toyota Cressida.

He asked whether PGA Tour Canada had a medical exemption so that he could take the summer off and get better, but when he found out there wasn’t one, he played on.

Machtaler made a seemingly curious decision to skip the Calgary stop on PGA Tour Canada so that he could defend his Canada Cup title. He finished second in that event, with none of that money counting toward his PGA Tour Canada stats, but the newfound confidence in his game meant he headed to Ottawa full of hope and four days later, $27,000 that would count toward the PGA Tour Canada money list.

Unlike last season, when Machtaler had to nervously get through PGA Tour Canada Q-School at Crown Isle on Vancouver Island, Machtaler can set his entire season schedule. “I’m playing every event on PGA Tour Canada because my goal is to get to the Web.com Tour next year and then make that next step up to the PGA TOUR,” said Machtaler.

That means his May will include a trip to visit his brother and niece in the Bay Area. But that’s only one part of the trip, as Machtaler will be trying to qualify for the U.S. Open at Chambers Bay by playing his first qualifier at Stanford University on May 13. He’ll then come back to the Lower Mainland and play the Vancouver Golf Tour’s Sandpiper Classic before starting out the year at the PC Financial Open at Point Grey, the opening event of the 2015 PGA Tour Canada season.

The devotion Machtaler has shown to meeting his golfing goals can be seen in how he attacks everything in his life. As a practicing vegan, his diet consists of only the freshest tofu, beans, nuts, vegetables, fruits and homemade flatbread pizza. Machtaler admits he does stray sometimes, but only because his mom’s homemade lasagna is something he’s eaten his whole life and can’t quite give up 100 per cent.

It’s a good thing Machtaler’s girlfriend, a medical resident, is also into the fitness craze, as he joked that while he was sweating out his workout, she would be mere feet away, working on the elliptical machine.

His girlfriend also was a good-luck charm, as she was on his bag for the Ottawa win. “Funny thing was she didn’t help me on anything related to golf,” said Machtaler. “But she calmed me down when I needed it and it was such a happy and fun time to spend with her.”

Machtaler said the improvement in how his back feels is best exemplified by the fact nothing, not even cold weather, fazes him this season. In fact, during a practice round at Predator Ridge’s Ridge Course where Carle had to leave early because of previous engagements (and an hour-long rainstorm), Machtaler continued on, playing better as the weather got worse.

“Last year, I would have gone in when Brodie left,” said Machtaler, “But my back feels good and in working with Zoke, I have to be mentally prepared for rounds like this when the weather’s not great and I have to continue to focus on my game.”

Machtaler said one of the ways he stays engaged despite the bad weather was because the Ridge Course has the feel, look and shot shapes of the Thunder Bay PGA Tour Canada stop, he played the course as if he was playing that tournament.

So it can hardly be a surprise that in the final four holes at the Ridge Course, Machtaler goes (-3) for these holes, including two long birdie putts made and a birdie on the uphill 461-yard 18th, which playing into a headwind, played closer to a 500-yard par-5.

“The only thing I have to do differently from last year is win twice,” said Machtaler. “That should get me my Web.com card and then I can take the next step toward making the PGA TOUR.”

And yes, if Machtaler does graduate from PGA Tour Canada this year, one of the first things he’ll do is replace his 27-year-old Cressida.