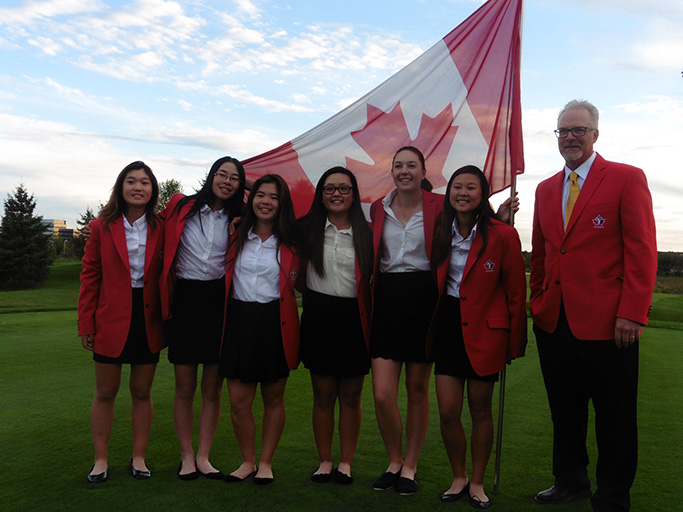 Of the 44 u-19 golfers standing in golf blazers, skirts and black dress shoes for the opening ceremonies of the World Junior Girls Championship at The Marshes in suburban Ottawa, it wasn’t hard to miss the six in the traditional red of Canada.

Five British Columbia girls, Hannah Lee and Tiffany Kong on Team Canada 1 with Ontario’s Grace St-Germain; and the all-BC Team Canada 2 squad of Alisha Lau, Kathrine Chan and Euna Han, were nervously waiting for the bagpiper to lead the 14 teams out for the ceremony.

Lau and St-Germain, who played in this event last year during its inaugural run at Angus Glen, were hugging each other, while Han and Chan were sitting down, to give their feet a rest.

Kong and Lee were quietly off to the side, both proud of the fact they would be representing Canada and hopeful the ceremonies would be done with soon so they could get back to what they’re most comfortable doing: playing golf.

Ann Carroll is coaching Team Canada 1 while Mike Martz has Team Canada 2 and both coaches were impressed with how the girls prepared and played their practice rounds on Sunday and Monday before the shots count for real on Tuesday in the first round of the 72-hole stroke play tournament.

Carroll will be relying on St-Germain’s experience to lead Team Canada 1, “I feel like I know what we have to do to play well in this tournament,” said St-Germain.

“It’s great to get to play this tournament and meet up with some of the girls I played with (earlier in September) in Kent, (England.)”

Lee and Kong have had unforgettable seasons already, with Lee winning the Canadian Juveniles and the Western Canadian Summer Games, while all Kong did was Monday qualify for the CP Canadian Women’s Open.

“We’re pretty excited to play in this,” said Lee. “I’m here for the experience,” said Kong. “I had a great experience at the Canadian Open and I think this will be a pretty good experience too.”

As for Lau, she’ll be the player Martz is counting on to lead Team Canada 2. “I feel like the experience I got last year will help,” said Lau. “It was really awesome to meet Brooke (Henderson) and to play in this against so many good players from all over the world.”

Lau and Chan are junior members at Quilchena and have played too many rounds together to mention. “It’s pretty cool to be able to play with Alisha at such a big event,” said Chan. “I’m gaining more experience in these types of big events.”

As for Han, the youngest member of the team, it wasn’t hard to see how she was itching to get out of her dress clothes and back into her golf gear. “I really wanted to make this team and now that I am on it, I have to go and play my own game,” said Han. “I’m ready for this.”

The opening ceremony on Monday afternoon featured The Marshes owner Sir Terry Matthews, the high-tech billionaire, telling the competitors how proud he was to have them on his course, which has played host to the Canadian Women’s Tour and five PGA of Canada Senior Championships.

And then Canadian Golf Hall-of-Famer Jocelyne Bourassa officially opened the tournament by telling the girls to compete and have fun and make new friends because these are the same girls many of them will be competing against in the years to come.

As the players went back to the clubhouse for an opening reception, the girls were happy to get out of their dress shoes and enjoy the last moments of fun before competition begins at 8 a.m. Tuesday.

The one last thing they needed to do: Go outside and pose with the Canadian flag.

In addition to the four competition rounds which run Tuesday, Sept. 22 until Friday, Sept. 25, there was a coaching symposium and a skills clinic on Sunday, Sept. 20, and a junior-amateur fundraiser on Monday, Sept. 21.

To learn more about the World Junior Girls Golf Championship, visit www.worldjuniorgirls.com. For more on The Marshes Golf Club, go to www.marshesgolfclub.com.