From Left, Euna Han, Alisha Lau, Tiffany Kong And Kathrine Chan Putt In A Line At Quilchena Prior To Leaving For The World Junior Girls In Ottawa - Image Credit Alfie Lau

The junior’s room at Quilchena Golf & Country Club in Richmond isn’t big, but with a large couch and two comfy armchairs, it’s usually more than enough for young golfers wanting to relax away from prying adult eyes.

So when Alisha Lau, Kathrine Chan, Tiffany Kong and Euna Han meet up just prior to flying out to Ottawa to represent Canada at the second World Junior Girls golf championship, it’s amazing that all four of them squeeze themselves onto the couch, in descending order of age.

“We’re all friends so this is going to be a fun week,” said Lau, the oldest of the four. Lau’s also quick to note they’re missing their fifth, Hannah Lee of Surrey, who couldn’t make it to Richmond because she had to complete a lab assignment. Lau and Lee, both in Grade 11, are turning 16 later this year and will be expected to provide some knowing leadership to the younger girls.

Lau played in last year’s World Junior Girls and understands the pressure that comes with the tournament, not only for the actual event, but because many coaches will be present, not only to evaluate which girls might be candidates for Golf Canada’s Development Squad, but to judge whether these golfers might be a fit in a college program once they graduate high school.

Lau and Chan have known and competed against each other for years and as junior members at Quilchena, this room is their place to relax and decompress, away from the adults. “I’m always trying to get better because it was one of my dreams to play for a national team,” said Chan. “I’m proud to make the team and now I’ll see how I do against players from all across the world.”

Kong, who plays her golf at Fraserview in Vancouver, uses the time at Quilchena to work on her short game, spending time on her chips and then on the putting green while they wait for Han, who had the longest distance to come, as she’s from Coquitlam. “I like to practice and that’s how I’ll get better,” said Kong. 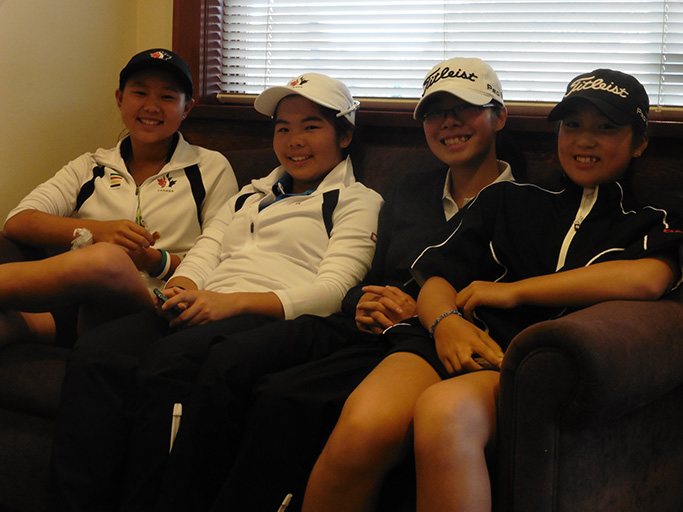 While Han is the youngest in age, having just turned 13 in August, she has undergone a growth spurt and is now taller than Chan and catching up on Lau, who’s a full three years older. But her relative youth doesn’t faze Han. “If you can play well, it doesn’t matter what age you are,” said Han.

The girls are happier to catch up and talk about their new teachers and all the homework they’ll have to do prior to and during the World Junior Girls. In fact, just getting them to get the clubs out involves Lau having to borrow a putter from the pro shop so that they can practice putting in lines on the putting green.

The four try the seemingly simple drill of sinking putts simultaneously, but it takes a half dozen attempts and a couple of changes in who putts furthest away before all the putts drop.

Between all of this is the inevitable laughter and joking between the four friends, who are trying to one-up each other by comparing how much homework they’ll have to catch up on that night alone.

When reminded that their fifth can’t make this meeting because of homework, they all laugh a bit more before getting back to the matter at hand, which is representing Canada at the World Junior Girls this week.

If the girls need any inspiration, they need look no further than last year’s Team Canada 1, which featured Brooke Henderson, now an LPGA winner. “Brooke is one of my idols and I’m so glad I got to meet her last year,” said Lau, who was also happy to show off the dragon claw move with her fingers that Henderson taught her last year as a quiet celebration after a birdie.

Now that the girls have arrived in Ottawa and gotten to know the challenging course at The Marshes, all that’s left to do is tee it up and see where their games stand against the best under-19 golfers in the world.