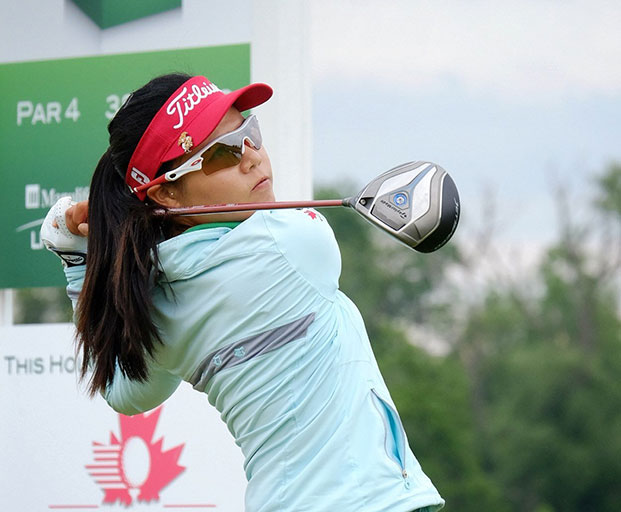 Langley, BC's Sue Kim Who Will Be Competing On The LPGA's Symetra Tour Is A Member Of Team Canada's Young Pro Squad For 2016 - Twitter Image

Golf Canada is pleased to announce the six athletes – two female and four male – who have been selected to the 2016 Team Canada Young Pro Squad.

The focus of the Young Pro Squad – now in its third year – is to bridge the gap for top graduating amateurs transitioning into professional golf. The program was developed in partnership with the PGA of Canada and is generously funded by founding partners Canadian Pacific and RBC, as well as supporting partners Citi Canada and the Golf Canada Foundation Women’s Fund.

“We are very proud of the Team Canada Young Pro initiative and how it is helping to bridge the gap between amateur and professional golf,” said Golf Canada CEO Scott Simmons. “These fine athletes have demonstrated clear commitment to the game and the results over a short period have been tremendous.”

Heading up the female contingent is long-standing Amateur Squad member Augusta James, who is looking to build on a strong year competing on the Symetra Tour in 2015. Her rookie campaign was highlighted by a victory at the Chico’s Patty Berg Memorial and two runner-up finishes. The 22-year-old finished at No. 12 on the Volvik Race for the Card money list. A former Canadian Women’s Amateur champion and three-time Amateur Squad member, James will return to the Symetra Tour in 2016 with priority status.

“I’m grateful to be back with Team Canada, which has played a huge role in my development as an amateur athlete,” said James, who currently ranks fourth among Canadians on the Women’s Rolex World Golf Rankings. “Golf Canada has been with me for most of my golfing career and I am honoured to move up to the Young Pro Squad.”

Joining James on the Women’s Young Pro Squad is Sue Kim, who has been with the program since its inception in 2014. The 24-year-old had a win at the Symetra Tour’s Florida Natural Charity Classic to go alongside two additional Top-25 finishes. Kim completed the season at No. 32 on the Volvik Race for the Card money list and will hold priority status on the Symetra Tour for 2016.

“I’m very excited to be a part of this great program once again,” said Kim, a graduate of Team Canada’s Amateur Squad program. “The support I’ve received has been a huge boost for my professional career and I have big hopes for 2016.”

Taylor Pendrith makes his return to the men’s squad following a breakthrough season in which the 24-year-old compiled three runner-up finishes and two additional Top-10 finishes on the Mackenzie Tour-PGA TOUR Canada. The Kent State alumnus also tallied two Top-25 finishes on the Web.com Tour to cap an impressive rookie year as a professional. Pendrith finished third on the Mackenzie Tour-PGA Tour Canada Order of Merit to become one of five athletes to graduate onto the Web.com Tour with granted status for 2016. 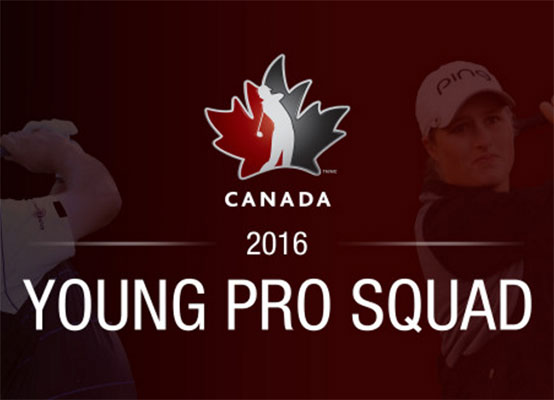 “Having the Young Pro program so invested in my future success is very humbling,” said Pendrith. “I’m so happy to have all the guys back and am thankful for the continued coaching and advice from Derek (Ingram) and the sport science team.”

Mackenzie Hughes and Albin Choi, both members of the Young Pro Squad since its inception, will return for a third consecutive year.

Hughes, 25, earned status on the Web.com Tour in 2016 with a T21 finish at stage-three of Qualifying School in December. A former two-time Canadian Men’s Amateur champion, Hughes’ season featured seven Top-25 finishes on the Mackenzie Tour-PGA TOUR Canada, with his best result a T3 finish at the ATB Financial Classic. The former Kent State Golden Flash finished 13th on the Mackenzie Tour-PGA Tour Canada’s Order of Merit in 2015.

“The ongoing support from Golf Canada and the program supporters is a huge boost for me and my goals to improve my game,” added Hughes. “I’m very thankful for what the Young Pro program has meant to my career and continued development.”

Choi recorded three Top-10 finishes including a victory on the Mackenzie Tour-PGA TOUR Canada in 2015 to finish the year sixth on the Tour’s Order of Merit. An Amateur Squad graduate, Choi also added two wins on the SwingThought Tour to his résumé in 2015. The 23-year-old former Canadian Men’s Amateur champion will hold conditional status on the Web.com Tour this season as a result of his T14 finish at stage-three of Qualifying School.

“I’m thrilled to be back on the Young Pro Squad and continue my journey as member of the Team Canada family,” said Choi. “The program has been such a huge help for my career and I’m looking forward to making great strides in 2016 to perform at the highest level.”

Rounding out the male contingent is three-time Amateur Squad member Corey Conners. In 2015, the 24-year-old recorded two Top-10 finishes on the Mackenzie Tour-PGA Tour Canada, two Top-25 results on the Web.com Tour and a T3 finish on the PGA Tour Latinoamérica. Conners – who competed in the 2015 Masters because of a runner-up finish at the 2014 U.S. Amateur, finished his rookie year as a professional at No. 37 on the Mackenzie Tour-PGA Tour Canada Order of Merit. He recently earned medalist honours at PGA Tour-Latino America Qualifying School to secure his playing status on that Tour in 2016.

“This will be my fifth year with the Team Canada program which has become a strong bond – almost like a family,” reflected Conners. “I’m thrilled to be back on the Young Pro Squad and am looking forward to a successful 2016 season.”

“I’m excited to see these young athletes further their progress through the professional ranks as they build upon their careers,” said Gary Bernard, Chief Executive Officer of the PGA of Canada. “The commitment Golf Canada has shown in collaborating with the PGA of Canada in our world class teaching and coaching certification programs is commendable.”

The continued success of the Young Pro Squad is due in large part to a focused fundraising effort on the part of the Golf Canada Foundation.

“Now entering our third year of support, generating funds for the Young Pro program remains a top priority for the Golf Canada Foundation,” said Foundation CEO Martin Barnard. “We look forward to the continued success of the Golf Canada Young Pro Squad in developing the next wave of professional Canadian golfers to inspire golfers of all ages and abilities.”

Throughout the season, Golf Canada will closely monitor the performance of elite Canadian amateurs transitioning to professional golf with the possibility of program expansion.