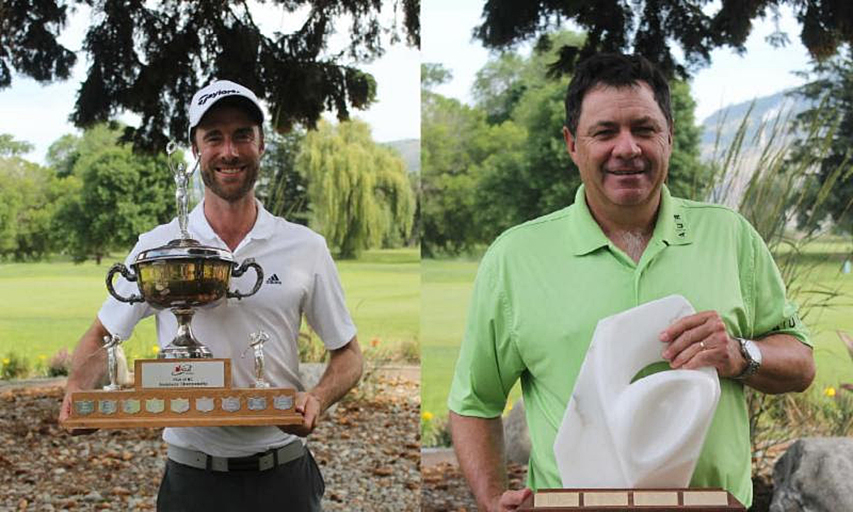 JUNE 7, 2016 - Kamloops, B.C. (PGA of BC) - In a final round that saw several players in contention for the FlightScope PGA of BC Assistants' Championship presented by My Turn Health & Fitness Equipment Inc. at Kamloops Golf & Country Club, Oliver Tubb (University Golf Club) finished atop the leaderboard, earning the PGA of BC Assistants' Champion title for the second time in three years.

"Yesterday, both Darren [Griff] and Doug Morgan had played a great round, while myself, John Shin, and Alec Hubert were all in the second group," said Tubb after his win. "When you're three back, you know you have a chance, but you also have to play really well so I just plugged away at it."

Tubb shot 69-67 to finish the tournament at 8-under, just one stroke ahead of Shingo Akizuki (Mayfair Lakes Golf & Country Club) and Darren Griff (Morningstar Golf Club). After Monday's first round, Griff led the field alongside Doug Morgan (Richmond Country Club) however, a hot back nine for Tubb consisting of four birdies and just one bogey would ultimately solidify the win.

The PGA of BC Seniors' Championship presented by My Turn Health and Fitness Inc. saw a repeat Champion for the first time in its history as Phil Jonas (Hazelmere Golf & Tennis Club) successfully defended his 2015 title. Jonas opened with a 7-under 65 in Monday's first round to give himself a healthy lead going into the final round.

"I struggled with my game [today] but I was very fortunate to shoot the score I did yesterday," said Jonas, who shot 65-71. "Murray Poje played really well at the end, and I was fortunate to have been lucky early on, because it might have been a little difficult to win otherwise."

With a scorecard that included an eagle on the eighteenth hole, Murray Poje (Tsawwassen Springs Golf) finished 3 strokes behind Jonas after a two-under-par 70 in the final round. Rounding out the top three was Keith Vandenbrink (Hillview Golf Club) who finished alone in third place at two-under-par. Jonas took home $1,500 for his win, while Poje and Vandenbrink earned $1,100 and $900 respectively.

Click here for the full results of the 2016 FlightScope PGA of BC Assistants' Championship presented by My Turn Health and Fitness Equipment Inc.

Click here for the full results of the 2016 PGA of BC Seniors' Championship presented by My Turn Health & Fitness Equipment Inc.

PGA OF BRITISH COLUMBIA: GOLF - OUR BUSINESS, OUR PASSION
The PGA of BC is an association of highly skilled and dedicated golf professionals who promote, play, develop and advance the game and business of golf for the benefit of its members and the people of British Columbia. Our members teach and administer golf while providing strong leadership in the community through charity events and volunteering. Dynamic and savvy, PGA of BC professionals are available at more than 200 golf facilities - a vital resource to the future of the game in Canada's golf capital. For more information, click here to visit our website.