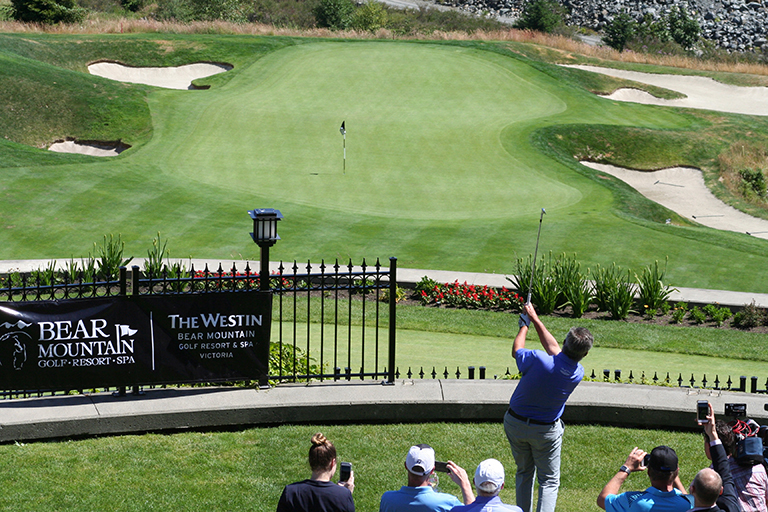 VICTORIA -- Bear Mountain hopes its first Champions Tour event won’t be its last. The Greater Victoria resort is preparing, on very short notice, to play host to the Pacific Links Championship on the 50-and-over circuit. The 54-hole, $2.5-million US event goes Sept. 22-25.

And Bear Mountain’s owner, Ecoasis Developments, has made it clear it would love to have a permanent spot on the Champions Tour schedule. “We want this to be successful in 2016,” David Clarke, chief financial officer of Ecoasis, told a news conference this week. “But not just 2016 . . .we would really love to see this as a fixture on the Champions Tour schedule going forward.”

The tournament’s title sponsor, Pacific Links International, did not rule out that possibility. The company, which offers its members reciprocal access to more than 500 properties around the world, is entering the fourth year of a six-year contract with the PGA TOUR.

“We are committed to Canada for (years) five and six,” Charles Lorimer, chief operating officer of Pacific Links, told the news conference. “In 2017 and 2018 we have not announced a site and yes, the possibility is certainly there and is one that is very intriguing. We are going to evaluate past 2016 immediately after this year’s event.”

Right now, of course, the priority is to make sure this year’s event is a success. Bear Mountain landed the event, which was originally scheduled for Tianjin, China in early May. The tournament had to moved because of an explosion in the Tianjin area.

Players are only beginning to commit to the Bear Mountain event. Those confirmed include past major championship winners like John Daly, Bob Tway, Jeff Sluman, Larry Mize and Mark Calcavecchia. “The commitments are just starting to come in,” Lorimer said.

“The vast majority of players on the tour have not been to Victoria before. Interest is very high. We are trying to educate them on where Vancouver Island is and the city of Victoria and explain to them all of the activities that are available. So I would expect the field is going to be anywhere from very strong to sensational. It should be a wonderful time to get out and watch some of the great legends play golf.”

Two-time Champions Tour winner Paul Goydos thinks Bear Mountain and the Victoria area will be a hit with his colleagues. Goydos attended the event’s media day this week and liked what he saw. “What a spectacular venue,” Goydos said. “We could play every event here and it would be fine with me. The golf course looks fantastic and it’s going to show wonderfully on television. . .I can guarantee you the players are looking forward to coming here.” 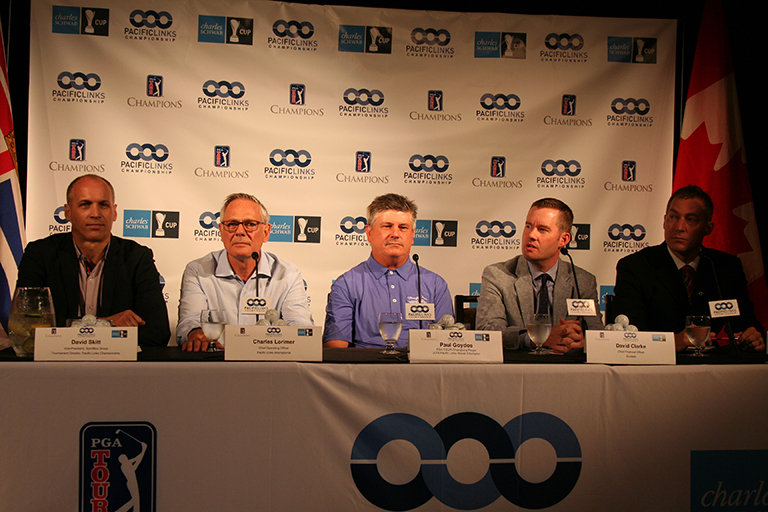 Goydos is the event’s defending champion. He won the tournament in 2014 when it was held in Hawaii. The event was not held in 2015 because of the explosion in Tianjin. Goydos, who also has two wins on the PGA TOUR, is a member of the exclusive 59 club on the PGA TOUR. He shot his 59 in the opening round of the 2010 John Deere Classic. Only six players have done that on the PGA TOUR.

Goydos is an interesting guy with a sharp sense of humour. A former substitute teacher from Long Beach, Calif., he has served on the PGA TOUR policy board and has never been afraid to voice his opinion.

And his opinion of his game this year is not good. “I have stunk all year,” Goydos said. “It’s a fact. I just haven’t played well. You see a (Bernhard) Langer on our Tour or a (Jordan) Spieth and Tiger (Woods) back in the day and compare everyone to them. The reality is the vast majority of professional golfers play well five or six weeks and play pretty mediocre 20 weeks. And I have had my mediocre weeks the first 20. . .”

Goydos drew laughter when he stole a line from Kirk Triplett, last week’s winner on the Champions Tour, and said: “I am too inconsistent to be bad all the time.” Goydos also made it clear he thinks Daly is a great addition to the Champions Tour.

People don’t really want to talk about it, but he is the pioneer. . .John is a revolutionary in our sport and he doesn’t get credit for it. But I think the public kind of gets that. He was the first guy who played the modern game that is being played today. Without John Daly it is probably a totally different sport. He is an iconic person, in my opinion, in our sport.”

The tournament will be played on the Mountain Course at Bear Mountain, which was co-designed by Jack and Steve Nicklaus. It will play as a par 71. Tournament organizers hope to attract more than 30,000 spectators during the week.

The mountainside layout will provide some challenges for spectators, but director of golf Jordan Ray said there are ideal viewing locations located around the course. “It is going to be tough to walk 18 holes behind your favourite player, but there are some really good viewing corridors where you can watch the action,” Ray said.

“There are some opportunities where you can see a bunch of different golfers and not have to hike up any of the steeper hills that we have on the golf course. . .we have four viewing corridors where we are going to try and encourage fans to watch.”

Tickets to the Pacific Links Championship are now on sale. One-day passes on tournament days sell for $40, including taxes and fees. Weekly passes are available for $99. For more information, visit pacificlinkschampionship.com.