ABBOTSFORD -- There was no post-B.C. Amateur Championship letdown for Nolan Thoroughgood. Just over a week after becoming the youngest ever winner of the B.C. Amateur, the 15-year-old from Victoria had a B.C. Summer Games gold medal placed around his neck early Saturday evening at Ledgeview Golf Club in Abbotsford.

Thoroughgood shot rounds of 69 and 71 to finish the 36-hole competition at even par. The Royal Colwood Golf Club junior member won the individual boys’ title by six shots over silver medallist Kyle Claggett of Mission. Sean Buckles of North Vancouver finished one shot behind Claggett and took home bronze.

The girls’ winner also came from Victoria as 13-year-old Akari Hayashi of Uplands Golf Club won with a 36-hole total of 13-over par. She fired a five-over 76 in Saturday’s final round. Thoroughgood, who won the B.C. Amateur at Pheasant Glen in Qualicum Beach, finished his round Saturday with a birdie on the par 5 18th hole. He said Saturday’s round was much more of a struggle than Friday’s, when he hit 17 of 18 greens in regulation.

“I didn’t play very well today,” he said. “I wasn’t hitting the shots I was picturing. There was a point where I thought my round was going south on me, but I made some good putts for par and rallied off that and made some birdies coming in.”

He made a couple of world-class up-and-downs for par on the 12th and 16th holes. Thoroughgood had not played Ledgeview before this week’s event, but knew a bit about its history and the players it has produced like PGA TOUR regulars Adam Hadwin and Nick Taylor. “I know some pretty good golfers have come out of here and you can see why,” he said.

“It is pretty demanding, it’s tight and the wind was blowing which apparently isn’t normal. But it definitely made the golf course a lot harder with the wind. It really tested my game, my ability to grind.”

The last couple of weeks have been something of a blur for Thoroughgood. No one -- not even Thoroughgood -- expected him to win the B.C. Amateur. He has received considerable media attention since that win. “It is cool and it has been a little crazy,” he said. “I have wanted to practise and stuff, but I haven’t really had the time I needed.” 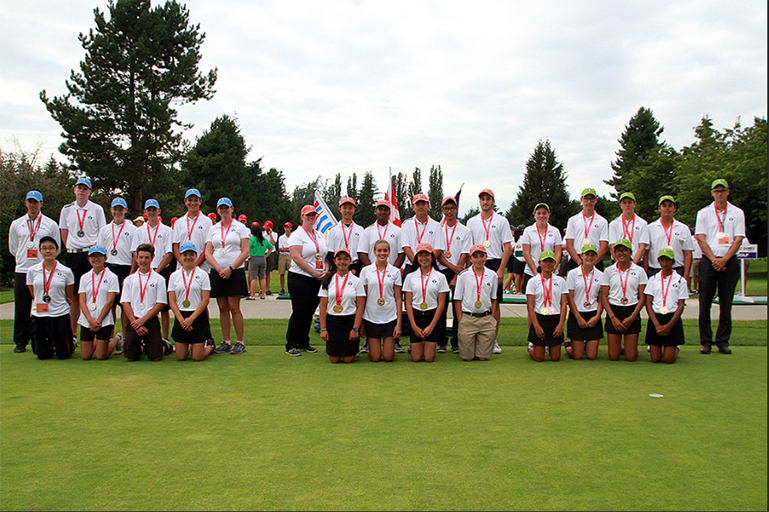 Pictured Above Are The Zone Team Medallists For The 2016 BC Summer Games.

He knew that expectations at the B.C Summer Games were sky-high for him. “I definitely wanted to win,” he said. “It’s something you are not going to experience every day. I wanted to soak up the team atmosphere.” Thoroughgood’s Zone 6 (upper Vancouver Island) picked up a bronze medal in the team competition.

They finished at even par in the three best net competition. That was seven shots behind the winners from Zone 4 (Delta, Greater Vancouver, Squamish, Sunshine Coast). Zone 3 (Fraser Valley) earned the silver medal at two-under par.

Hayashi won the girls’ gold by five shots over Jessica Wu of Langley. Alyssa Chang of Surrey won bronze. “Come on, a gold medal,” said a smiling Hayashi. “This is pretty cool. I am pretty happy about this. Personally, I wish I could have played better but this course is hard. You have to know where to leave your shots. The greens are tricky and the pin positions were quite difficult today.”

Both Thoroughgood and Hayashi now have some travelling to do. Both are heading to their respective Canadian Junior championship tourneys. The girls are playing Aug. 2-5 in Shubencadie, N.S., while the boys’ event goes Aug. 1-4 in St. John’s, Nfld.

Thoroughgood will then be stopping in Ottawa on his way home from Newfoundland to play in the Canadian Amateur Championship. “That will be a different level than what I have been playing,” Thoroughgood said. “The BC Am was huge for me, but now I am going to the Canadian Am and it's even bigger. I don ‘t really have any expectations. I am doing good in the province, but doing good nationally is different.”