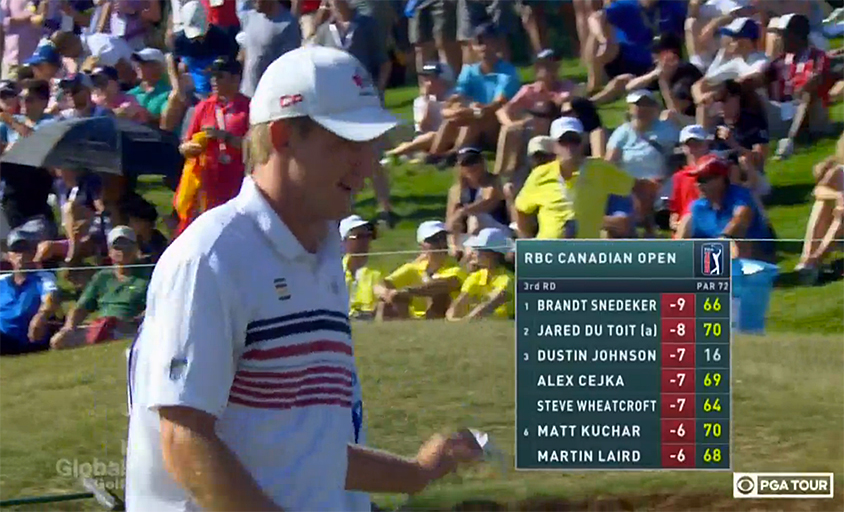 Team Canada’s du Toit of Kimberley, BC, Shot 70 Including A Dramatic Eagle On The 18th Hole For A Share Of Second With Dustin Johnson - Image Courtesy Golf Canada

OAKVILLE, Ont. – Brandt Snedeker conquered the dense heat and gusty winds at Glen Abby Golf Club Saturday to card a 6-under 66 and take the lead at the RBC Canadian Open. Heading into the final round, Golf Canada National Amateur Squad member Jared du Toit holds a share of second with Dustin Johnson, one shot off the lead at the 107th playing of Canada’s National Open Championship.

Du Toit tallied three bogeys and a pair of birdies across the front nine, but the resilient 21-year-old went on to finish bogey-free across his final nine holes, collecting a birdie on No. 13 and an eagle on No. 18. The crowd roared in approval and an impromptu performance of O Canada accompanied the Kimberley, B.C., native as he stepped off the course.

“Unbelievable, can’t say anything else but that word,” reflected du Toit when asked about the cheering crowd and his remarkable day. “It’s truly been a dream so far and seeing that putt go in was just a great cherry on top to the round.”

As the Arizona State University senior prepares for the biggest round on the biggest stage of his young career, he remains focused on the task, but is unsure of his preparations. “I have no idea,” du Toit responded when asked about his ability to maintain patience and perspective tomorrow. “I’ve never been there, but I’m looking forward to it. I’ve never kind of been in this kind of pressure, this atmosphere before. I’m here having fun and trying to go and play golf. It hasn’t set in so far, but loving every minute of it.”

Du Toit is one stroke back of 54-hole leader and Tennessee native Brandt Snedeker, who carded five straight birdies across holes two to six en route to a 66 which vaulted him into contention; an eagle on No. 18 securing him sole possession of the lead. Snedeker looks forward to the experience of playing with the Canadian amateur in the final pairing.

“I think I’m going to be the most hated man in Canada tomorrow, but it’s going to be a lot of fun trying to figure it out. He’s great. For a 21-year-old kid to be playing golf here is awesome, let alone to do it in your National Open. I mean, I can’t imagine the nerves this kid has to be playing as great of golf as he has.

Snedeker feels a connection to the country and the course where he claimed victory at the 2013 RBC Canadian Open. “I’ve been in this situation before here, winning three years before here and so I’m excited to be back,” he said. “This is as close to home – kind of a home away from here. My caddie is from here and RBC has been one of my sponsors for a long time. I feel like I’ve got some friends and family rooting me on tomorrow.”

Tied alongside du Toit is U.S. Open champion and World No. 2 Dustin Johnson. The 36-hole co-leader notched four birdies and finished with a 71 for a second straight day. “Tomorrow, I feel like I’m playing pretty well, swinging the ball well,” Johnson said. “Got a lot of confidence in my golf swing right now. So just need to go out and make some birdies early and put some numbers on the board.”

Adam Hadwin of Abbotsford, B.C., is T44 at even-par following a 2-over performance. Amateur Garrett Rank from Elmira, Ont., is tied for 71st, while fellow Ontarian Corey Conners of Listowel is 78th.

Tee times for the final round can be found here.

CANADIANS AT THE 2016 RBC CANADIAN OPEN

Sleeping on the Lead Campaign
PGA TOUR players who win a Tour event after holding the 54-hole lead – a feat referred to as ‘sleeping on the lead’ – will receive the new TEMPUR-Breeze bed from Tempur-Pedic. One fan who has entered the Sleeping on the Lead Sweepstakes at tempurpedicgolf.com and one military member from the PGA TOUR’s Birdies for the Brave® program will also each win a new TEMPUR-Breeze bed. This program will run until the TOUR Championship which concludes on September 25.