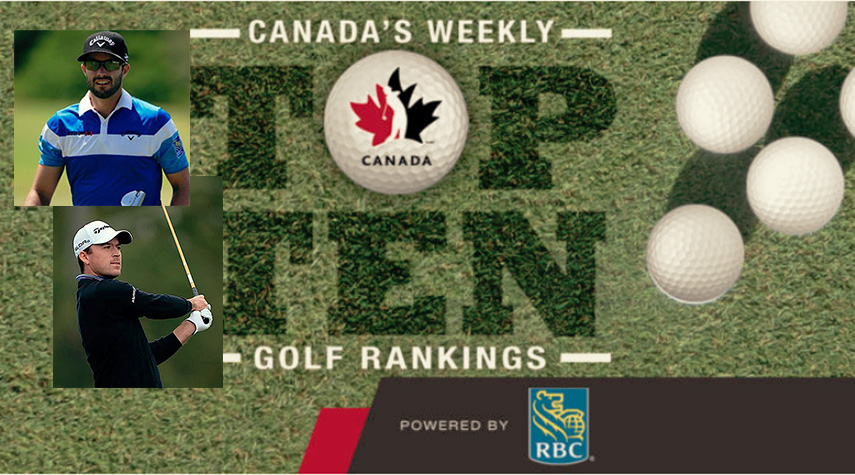 As The PGA TOUR has quickly teed off on its new season, we note that two of Canada's top 3 ranked Male Professionals hail from Abbotsford, BC. Fitting also that Adam Hadwin (No.1) and Nick Taylor (No.3), will be partnering up to represent Canada at the upcoming World Cup of Golf in Melbourne next month.

Meanwhile, BC continues to see its fair share of players in both the Men's and Women's amateur and professional categories holding prominent positions in the Weekly Top Ten Powered by RBC Canadian Rankings.

It was the second consecutive victory in as many tournaments for the Quebec golfer who also earned tournament all-star honours. The result also moved him up to No. 7 in the Canadian rankings.

Myles Creighton and Golf Canada National Team member Joey Savoie were the only other Top 10 golfers to make any positive gains this past week, picking up 19 and six places respectively in the world rankings.

Jaclyn Lee begins her second week atop the amateur rankings by picking up two places in the world rankings as she continues her quest at LPGA Q-School. The Golf Canada National Team member from Calgary has advanced through to the final stage, where the top 45 players will earn LPGA status for 2019.

After relinquishing the top amateur ranking in Canada last week, Golf Canada National Team member Maddie Szeryk falls off the amateur world rankings table following completion of the second stage of LPGA Q-School. While Szeryk failed to advance to the final stage, she has earned status on the Symetra Tour for 2019.

MEN’S TOP 10
Adam Hadwin picked up three places in the world rankings after finishing in a tie for 10th at The CJ Cup @ Nine Bridges. The result was his first points-paying finish of the new season and was worth 6.75 world ranking points, leaving him at No. 60 in the world which is where he ended the year last year.

Other notable results: No. 6 Austin Connelly missed the cut at the European Tour Andalucia Valderrama Masters;

WOMEN’S TOP 10
No. 5 ranked Maude-Aimee Leblanc was the only player inside the Top 10 to make a positive gain in the world rankings, picking up three places.