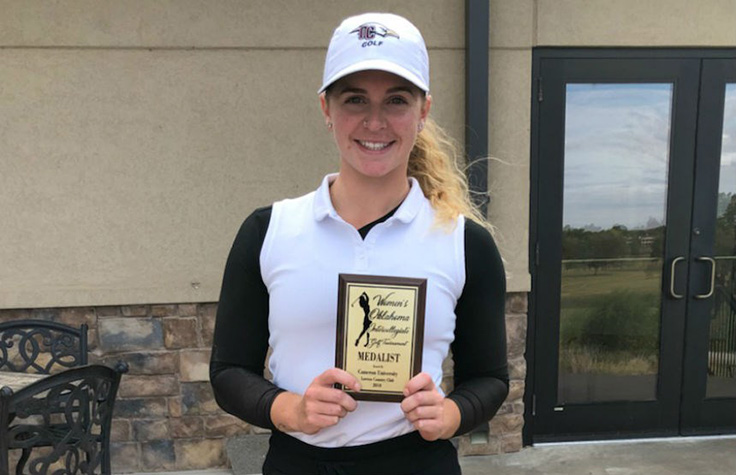 LAWTON, Okla. (Oct. 23, 2018) – Oklahoma Christian's Abigail Rigsby played brilliantly at Lawton Country Club, but she still needed to put on a steely display of endurance in a four-hole playoff for medalist honors.

The junior from Courtenay, British Columbia, capped her final-round 1-under-par 70 with her second career playoff win to take top honors in the Oklahoma Intercollegiate, leading the 15th-ranked Lady Eagles to a runner-up team finish in the 12-team event.

Rigsby, who played the par 5s on the 5,985-yard course in 3-under for the tournament, was the only player in the 69-woman field who shot under par on Tuesday. She finished the two-round tournament at 144 (2-over), tied with Junie Khaw of Tarleton State (Texas), who posted her second straight 72.

As she did in the West Super Regional in May 2016, when she won a playoff to earn a spot in the NCAA Division II Championship, Rigsby prevailed – albeit in the longest playoff ever for an OC women's player.

The win was the second in Rigsby's career, the second by an OC player this fall and the 18th individual win in the program's history. Rigsby, who also won last March in the Midwestern State Invitational in Wichita Falls, Texas, became the fourth OC player to record multiple wins, joining Anna Arrese Cortadellas (eight), teammate Kate Goodwin (four) and Audrey Meisch (three).

OC golfers now have won the Oklahoma Intercollegiate two of the past three years, as Goodwin took top honors in 2016, when the event was played at Fort Sill Golf Course.

Goodwin – who posted OC's other individual fall win this season, in the Dallas Baptist Match Play Invitational – was the Lady Eagles' No. 2 player Tuesday. The senior from Tulsa fired a 72 and tied for fifth overall at 149.

Freshman Alexandria Bennett, who held a share of the first-round lead after shooting 72 on Monday, posted a 79 and her overall score of 151 tied her for eighth, giving her her first career top-10 finish. She led the field with nine birdies in the tournament.

Senior Elizabeth Freeman finished 15th at 153 after a final-round 78, while sophomore Shaley Goad shot an 80 and was 43rd at 162. Playing as an individual, OC freshman Felicity Wittenberg tied for 19th at 155 after posting a 74 on Tuesday.

OC's team score Tuesday of 299 put the Lady Eagles at 597, three shots behind No. 25-ranked Tarleton State. The Lady Eagles finished well ahead of third-place Angelo State (Texas), which had a two-day score of 611.

The Oklahoma Intercollegiate was OC's final tournament of the fall, a season in which the Lady Eagles won one event (the Northeastern State Women's Classic) and finished as the runner-up in two others. OC will begin its spring season March 4-5 in the Diffie Ford-Lincoln Invitational at Kickingbird Golf Course in Edmond.