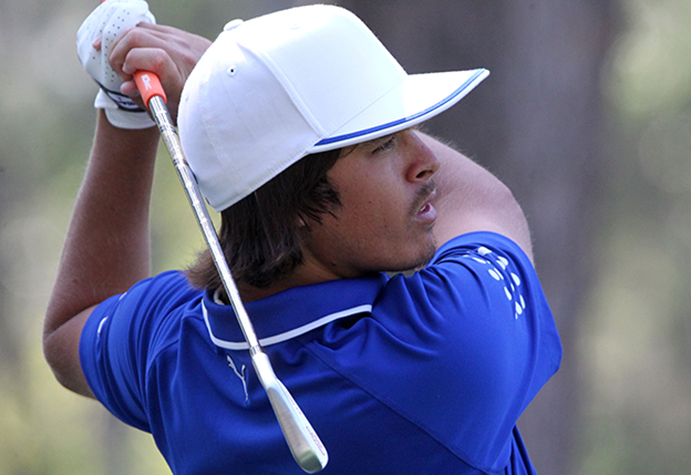 Three years after he should have won the Waste Management Phoenix Open, Rickie Fowler seems to be on the precipice of making his dream come true. A remarkable round of (-7) 64, which featured eight birdies and just one lone bogey has Fowler four strokes clear of Matt Kuchar and five clear of roommate Justin Thomas.

In 2016, Fowler was leading by two with just holes to play, but after driving it into the water behind the 17th hole, he was forced into a four-hole playoff, which he eventually lost to Hideki Matsuyama.

This year, on a sun-splashed Saturday where the usual thousands of Phoenix golf fans come out in droves, it was Fowler who set the torrid pace, with birdies on four of his first six holes to open up a five-shot margin. The lead would yo-yo back to as little as three, but Fowler really put his stamp on the round by making his final birdie on the par-4 17th.

The top Canadian is Brantford, ON’s David Hearn, who played in a marquee group with Jon Rahm and Gary Woodland. But Hearn could only muster an even-par round of 71 that has him at (-7) for the tournament and T26.

Two strokes behind Hearn is Abbotsford’s Adam Hadwin, who shot (-2) 69 Saturday on the strength of three birdies and just one bogey. At (-5) and T41, Hadwin will need a low round Sunday to cash a big cheque at the tournament closest to his new adopted home.

Hadwin and his group of Jason Kokrak and Xander Schauffele had the honour of being the first group to play the raucous 16th hole. None of the three could make birdie, but salvaged some love from the fans by each throwing their balls into the crowd, with Hadwin giving his to a fan wearing a Tom Brady New England Patriots jersey.

Saturday at the Waste Management is known for interesting things that can happen.

For example, on the 16th hole, there was a golf bag and yellow baseball cap commemorating Jarrod Lyle, who made an ace here years ago and passed away last year. There was appropriate respect paid to Lyle’s memory, but there was also the usual silliness.

Max Homa, the Californian who Monday qualified alongside Canadians David Hearn and Blair Hamilton, is a diehard Los Angeles Dodgers fan and after hitting his wedge to 23 feet while wearing a Dodgers baseball cap, donned a Clayton Kershaw #22 jersey as he walked up to the green.

As fans serenaded him with chants of “Dodgers suck,” Homa went on to three-putt and took a costly bogey en route to an even par round of 71 and at (-4) and T45, he will need a career round on Sunday to earn a decent paycheque.

Also on Saturday, a rules controversy that started on Friday when Denny McCarthy was penalized two strokes for his caddy allegedly lining him up on an approach shot, continued on Saturday when the PGA TOUR rescinded the penalty. Fowler called the original penalty possibly one of the stupidest he’s ever seen and said the rescinded penalty might be the best decision the PGA TOUR has ever made.

As for other distractions here in Phoenix, the crowd was still buzzing from Friday night’s Bird’s Nest concert where Snoop Dogg and The Chainsmokers tore the house down. Snoop actually flew out early Saturday and will be playing a show in the Super Bowl city of Atlanta just 24 hours after playing in Phoenix.

While the crowds were as large as expected at TPC Scottsdale, we won’t know exactly how many people were here because the Thunderbirds, the local organizers of this tournament, announced earlier this week that daily attendance will no longer be announced because their main focus on numbers will be on the number of charity dollars raised.

Sunday at the Waste Management Open will feature true golf fans who can accept missing part of the Super Bowl to see the final putt go in approximately 30 minutes before kickoff. Of course, that hasn’t been the case the last three years, because of playoffs, won last year by Gary Woodland and the previous two years by Hideki Matsuyama.