Another Historic Final Round at Augusta National 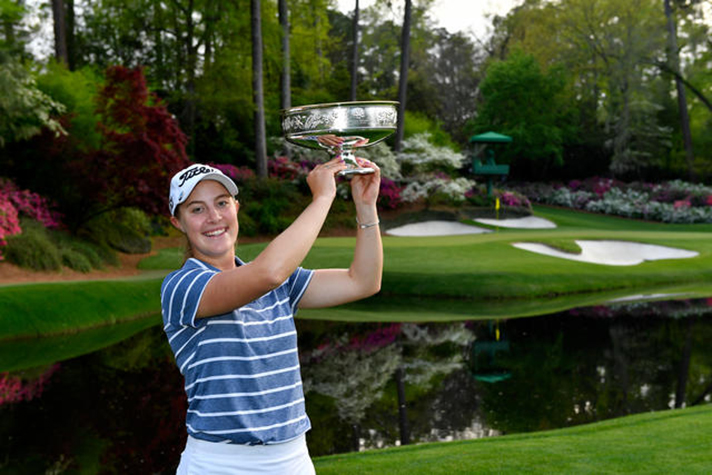 Jennifer Kupcho Of The United States Poses With The Trophy On The No. 12 Hole After Winning The Augusta National Women's Amateur, Saturday, April 6, 2019 - Image Courtesy ANWA Images

A Masters Champion arrives on the first tee, then stands respectfully to the side as four legends in women’s golf, all World Golf Hall of Fame members, stroll across the tee and stand beside their clubs.

Se Ri Pak, Lorena Ochoa, Nancy Lopez and Annika Sorenstam hit ceremonial tee shots followed by a few tears, lots of smiles, hugs, and handshakes. Finally, Anna Redding is called forward and the first tee ball is in the air. The final round of what is sure to become an historic championship, is underway.

A couple of hours later, world #1 women’s amateur, Jennifer Kupcho and #9, Maria Fassi are striding off the tee and all 30 competitors are scattered around Augusta National Golf Course. For the first time these women will play golf in front of massive galleries and on live television.

Fassi, starting 2 shots behind Kupcho, gets off to a quick start with 4 birdies on the front nine as opposed to a single birdie for Kupcho. As they head to the 10th tee Fassi has a one-shot lead and there are only two competitors still in contention to win.

Both players hit the 10th green in regulation with Kupcho 30 feet away and Fassi facing a 15-foot birdie putt. Kupcho ran her first putt 4-feet past the hole, then missed the comeback before sinking the 5-foot bogey putt. It appeared she was having difficulty or perhaps feeling the pressure as she squatted down and spent a long time with her head down before standing and stroking in the putt.

On the 11th tee she sat for a long-time, head down, as Fassi took a comfort break. After the round she revealed developing a migraine on the 8th hole which caused blurred vision in her left eye. She could “kind of see” the ball but could not line it up properly.

This is where having a local caddie, with good knowledge of the course paid huge dividends. She had to rely on him for the line and whether the putt was up or down a slope.

Fassi, now up by two, pushed the ball right on 11 then recovered, hitting a low running punch under several tree branches with the ball resting on pine needles coming to rest just short of the green. Nearly sinking the birdie chip, she was in for par. Kupcho played her second to the front of the green, left her long birdie putt 6 feet short then confidently stroked in the putt. 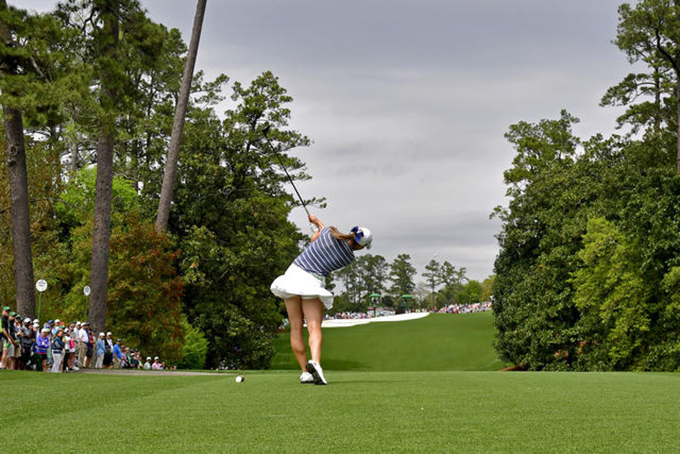 Jennifer Kupcho Of The United States Hits Her Tee Shot On Hole No. 18 During The Final Round Of The Augusta National Women's Amateur, Saturday, April 6, 2019

Kupcho hit a good shot on 12 but missed the birdie putt while Fassi got up and down for par from the front bunker. Fassi still up by 2.

On 13, both players hit good tee shots, Kupcho in the middle of the fairway, Fassi slightly to the right, ball, again sitting on pine needles, but with a clear shot to the green. Hitting first, Kupcho, in her words stated, “I probably hit the best shot of my career,” a high 3-hybrid, slight draw from 211 yards. Landing softly on the green the ball stopped 6 feet from the hole.

Fassi played safe, laying up short of the water, then pitched to the green coming to rest outside Kupcho’s ball and missed the birdie putt. Kupcho, still with a bad headache, but no blurred vision, then calmly rolled in the hard-breaking eagle putt. Mission accomplished, deficit erased, and on to 14, both players at 7-under.

Fassi birdied 14 to take back the lead. On 15 she pushed her tee ball right, pitched over the trees back to the fairway, then onto the green before missing the birdie putt. Kupcho split the fairway, then hit 3-hybrid to the back of the green. Trusting the green-reading skills of her caddie she played for the putt to break 5-feet, just barely missing the eagle putt but leaving a tap-in birdie. On to 16 tee, both at 8-under.

Kupcho hits a perfect a 7-iron using the slope to spin the ball left barely missing the hole-in-one. The ball comes to rest 6 feet below the hole and the birdie putt is true.

Fassi also hit a very good shot landing slightly right of the intended line and the ball comes to rest on the upper level. The birdie try is exceptionally well played but impossible to stop. Par putt missed and they exit the green Kupcho now up by 2 shots.

Both players par 17 while the patrons erupt in laughter when, in the quiet after the second par putt is made, the shrill voice of a young boy is clearly heard saying, “So, who won?”

On 18 Kupcho hits 3-wood off the tee, then leaves her approach shot 30 feet from the hole. Fassi hits driver into the second bunker left, pitches out then leaves her third just outside Kupcho but on the same line. Just prior to putting Fassi says to Kupcho, “I hope you go to school on this,” Kupcho replies, “I hope you're a good teacher”.

The record book will say it was a four-shot victory but that’s deceiving. The record book will also say the # 1 amateur woman in the world, hit the opening tee shot on day 1, finished both round 1 and round 2 in 1st place, then hit the last shot, a birdie putt to end the championship. 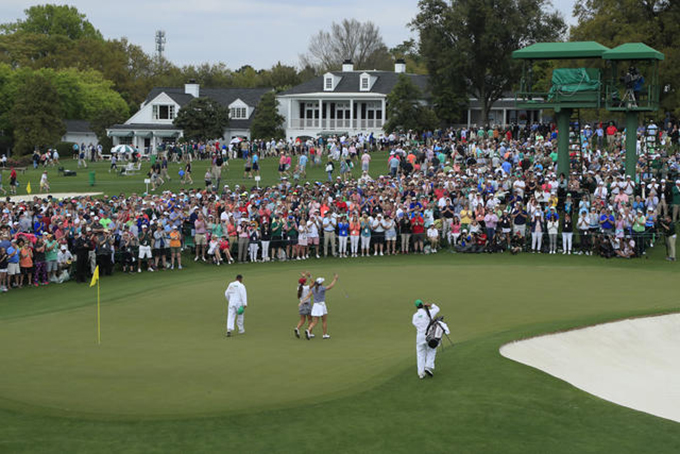 Jennifer Kupcho Of The United States And Maria Fassi Of Mexico Walk From Hole No. 18 After Kupcho Birdied To Win The Augusta National Women's Amateur, Saturday, April 6, 2019

Kupcho recorded the only eagle of the day for which she will receive crystal as part of an Augusta tradition.

Interestingly, Lorena Ochoa walked every hole close to or amongst an entourage of Fassi family and friends. She dared ahead of play slipping into available grandstands to watch putts. Only a few of the patrons seemed to recognize who was sitting among them. Bubba Watson, still in his green jacket, watched each group come through the 9th green.

Fassi and Kupcho were the only two players in the field who deferred turning professional just so they could play this event. Kupcho believes in the future the opportunity to play the Augusta National Women’s Amateur will deter others from turning pro early.

Both women are good friends and Kupcho stated during her post round interview, “Golf is about friends, it is fun. We will be on the LPGA Tour together next year.”

No doubt they will remain friends, women’s golf does that.