PGA of BC Names Provincial Recipients Of 2019 Awards 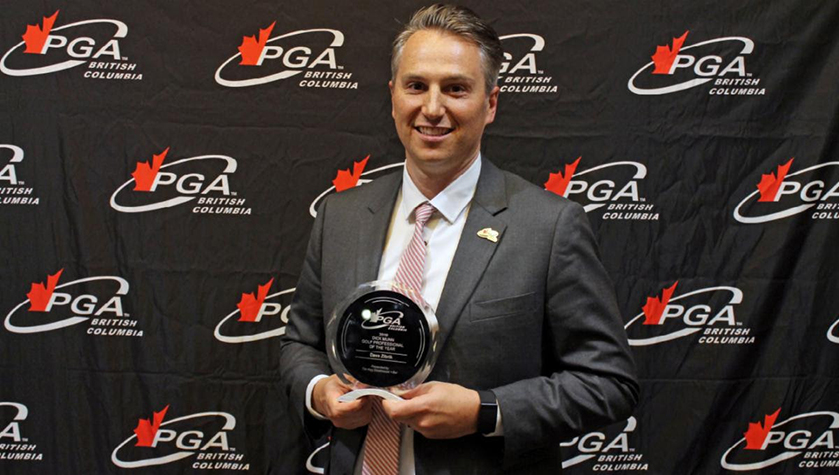 Point Grey Golf & Country Club Head Professional Dave Zibrik Was Presented With The PGA Of BC's 2019 Dick Munn Golf Professional Of The Year Award. Zibrik's Honour Was One Of Many Handed Out At The PGA Of BC Awards Celebration Presented By Replay Golf Supplies & Tribal, Held At The River Rock Casino Resort - PGA of BC Photo

OCTOBER 16, 2019 - RICHMOND, BC (PGA of British Columbia) - The PGA of BC proudly named the provincial recipients of its annual honours for 2019 during the Association's Awards Celebration presented by Replay Golf Supplies & Tribal on Wednesday evening at the River Rock Casino Resort.

Recipients were announced for the following 11 awards during the course of the evening's festivities:

As well, the Awards Celebration featured a special presentation from the ALS Society of British Columbia, honouring the efforts of PGA of BC Professionals who participated in this year's Golfathon for ALS across the province. In 2019, the initiative raised $194,290, bringing the 14-year cumulative total to approximately $1.9 million raised to support individuals and families affected by ALS.

A special presentation was also made to PGA of BC Executive Director Donald Miyazaki, who was recognized for his 10 years of service to the Association.

Congratulations to all of our deserving award recipients.

PGA OF BRITISH COLUMBIA: GOLF - OUR BUSINESS, OUR PASSION
The Professional Golfers' Association of British Columbia is an association comprised of nearly 700 golf professionals who work at and operate golf courses, driving ranges and other facilities across the province. Its mandate is to promote and advance the game of golf, serving the needs of both its membership and the golf public through professional and junior golf development programs and high-calibre competitive events. The zone office is located in Richmond. For more information, visit www.pgabc.org.