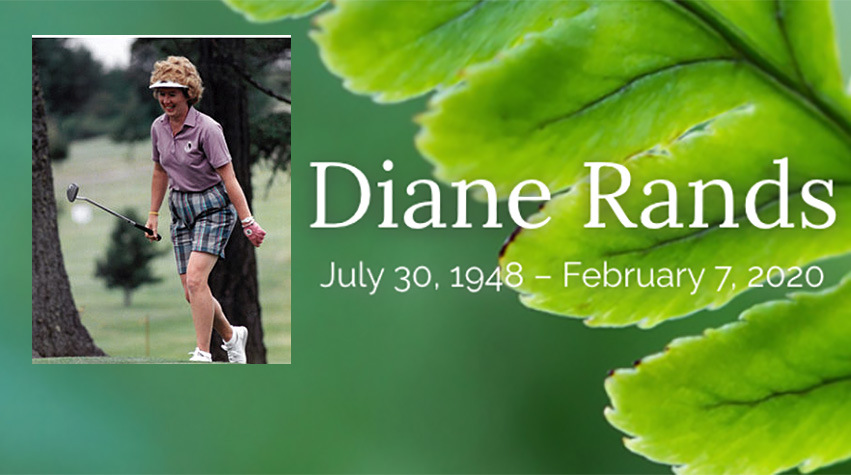 We lost another great friend and golfer on Friday, February 7th, as Diane Rands (Phillips), an honorary Life Member of Uplands Golf Club, passed away following a courageous fight with cancer. British Columbia Golf and the entire golf community wish to pass along our deepest condolences and best wishes to Diane's family and friends.

Aside from her stellar nursing career and family life, Diane was an extremely accomplished competitive golfer, still holding the Uplands women's course record of 67, and indeed this past Fall the Uplands Women's Club Championship trophy was renamed the Diane (Phillips) Rands trophy.

Below is the memoriam posted on the McCall Gardens website.

With sad hearts, we announce the passing of Diane following a fiercely fought 2 year battle with pancreatic cancer. Diane was born in Kamloops and moved to Victoria in 1966 where she graduated from Nursing. Most of her 33 year career was in CCU at RJH where she was loved and respected always.

Diane will be sorely missed by her loving husband, Bruce; stepdaughter, Shannon and all the Rands Family; brother, Lynn (Cheryl); nieces; great-nephew, and too many friends to count. Diane’s great passion was Golf and her accomplishments are legendary. Diane was brilliant at knitting, sewing and card making. Heartfelt thanks to her Doctors: Dr. Woodburn, Dr. McGhie, Dr. Gustafson-Vickers, Dr. Belle, all of the nurses and, the staff at the Cancer Agency and all of the nurses and support staff at Victoria Hospice.

In lieu of flowers, donations may be made to the Cancer Society or Victoria Hospice. Condolences may be offered to the family at www.mccallgardens.com

Diane has been a member in good standing since September 1, 1965 and has been a positive representative of Uplands at the course, in the community, and in the realm of competitive golf. She has a proven record of golf achievements and of giving back to her club.

Below is a summation of some of her accomplishments:

From her profile (as Diane Phillips) on the BCGA Zone 5 Women’s Golf website:

It all started in 1965 when Diane traveled from her hometown of Kamloops to Vancouver with Marilyn Palmer (now O’Connor and 1999 Hall of Famer) who was participating in the BC Ladies Tournament. With only two years experience, Diane played at Shaughnessy and came second in the Junior Tournament which qualified her for the BC Junior Team, then on to the Canadian Junior that same year, and won low gross in her handicap division.

The following year Diane moved to Victoria, deciding to go to University and then into Nursing School which put her golfing career on hold until the 12 hour shifts came into being in 1979. That year, Diane was runner up at the City & District to Dorothy DeGirolamo (Wilks).

Diane’s name can be found 8 times on the City & District Trophy (now known as the C-FAX Ladies Amateur) as well as runner-up on 4 occasions. Other credits include: 1991 winner of the BC Amateur, 1991 and 1993 member of the BC Provincial Team (first alternate in 1990); runner-up at BC Provincials in 1993.

In her first year of eligibility, Diane won the 1999 C-FAX Ladies Senior Championship and went on to become the 1999 BC Senior Champion and a member of BC Team. That same year, the City of Victoria nominated Diane for Athlete of the Year in the Masters Category. In 2000, Diane and her District 1 teammate, Alison Murdoch, were 50% of the BC Team that competed at the Canadian Seniors in PEI.

Diane also competed very successfully in the Victoria and District Foursomes Championships, winning first place with partner, Lorna Rooper in 1992. In 2015, Diane and partner, Carin Gallie and the team of Chris Vogelsang and partner, Jan Laidlaw tied with Cordova Bay for the Foursome Team First Place. In 2016 Diane and Carin were flight winners at the Foursomes.

Diane’s contributions to golf in the district extend beyond competitions. She served District One (now Zone 5) as the Handicap/Course Rating Chair for six years, then continued on as a member of the Course Rating team.

Other accomplishments include the following:

She also worked to support her club in the following capacities:

Working on the Match Committee and Handicap Committee for many years;

Diane and her mother were loyal Heart Tournament donors.

She did the scoring and helped with the organization for Monday afternoon Duplicate Bridge for many years and would still be doing so if her health allowed.

The Hole in one proved elusive, but Diane finally had her first hole in one about 8 years ago, and her first Uplands hole in one about 5 years ago. I had the pleasure of being in Diane’s group at the time. She thought she had hit the shot heavy, looked away and the rest of the group watched it as it went in the hole.

Here are a few other accolades to make you green with envy: Diane scored a 2 on #6 and similarly had a double eagle on #12 in a match that won her the city championship.

Most importantly, Diane epitomizes what an Uplands member should strive to be: an asset to her course and an ambassador for Uplands in the golfing community.

An Honorary Lifetime Membership of Uplands Golf Club is an acknowledgement of her important place in Upland’s history.