The Athlete of the Year Awards, founded by Sport BC, is the longest standing sport recognition event in Canada. Awards in 18 different categories are presented each year to athletes, coaches, officials and volunteers for their performance and contribution to sport in our province.

The awards play a valuable role in nurturing athletic success and recognizing some of BC’s growing talent. Sport BC is proud to celebrate the athletes, dedicated coaches, devoted officials and amazing volunteers from all member Provincial Sport Organizations and sport sector partners in British Columbia.

For over 50 years, Sport BC has recognized legendary sport heroes and emerging stars.

Annually hosted by CBC’s Scott Russell, it is an outstanding evening and tickets are still available for this marquee event that acknowledges the best of the best in all areas of sport in British Columbia.

2020 Sport BC Athlete of The Year Awards 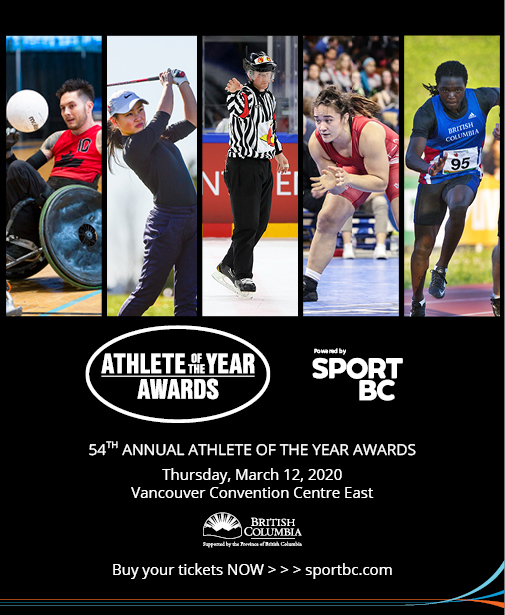 In 1966, a small group of dedicated volunteers created an organization to provide a unified voice for amateur sport in British Columbia. While much has changed over the years, our core purpose remains the same.

Who we are:
Sport BC is the non-profit sport federation, representing over 50 Provincial Sport Organizations (PSOs) in British Columbia. As a member-based organization, Sport BC offers services and programs to build the capacity of our members and advocate on their behalf to improve the landscape for organized sport in BC.

Mission:
Sport BC, as a member-based organization, supports the growth of amateur sport in BC and provides leadership through delivery of its programs and services for members.

Vision:
Sport in British Columbia is thriving through the leadership of Sport BC and our members.

What we work to achieve: