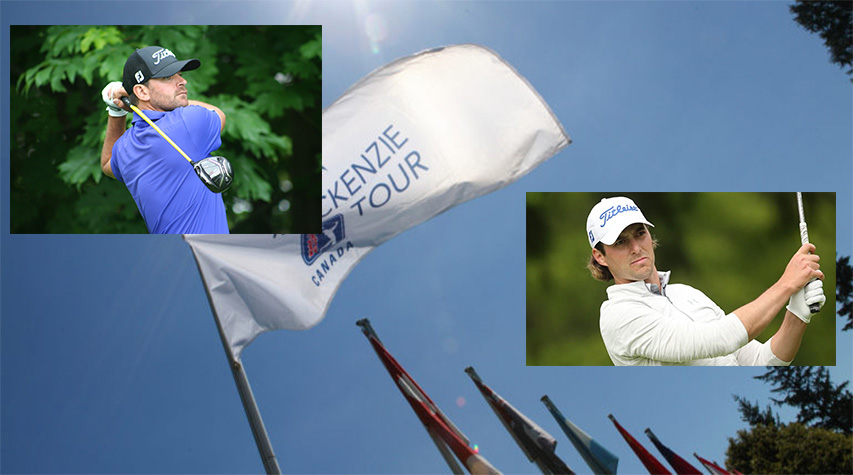 James Allenby and Riley Wheeldon were not surprised by the official word that the 2020 Mackenzie Tour - PGA Tour Canada season was being cancelled. Just profoundly disappointed.

Their professional golf dreams are on hold for another year. Langley’s Allenby and Comox native Wheeldon both had exempt status for this year’s Mackenzie Tour, which was officially cancelled on Friday.

“It’s disappointing to me because at this point in my career I was looking forward to the year and had high hopes for moving up and not looking back,” Wheeldon, a former B.C. Junior Boys champion, said over the phone from his Arizona residence. “But everyone is kind of in the same boat. Everyone has got to re-assess their goals and push them back by about a year now.”

Allenby was working in the pro shop of his family’s business, the Langley Golf Center, when he received the news Friday. “I wouldn’t call it a surprise,” Allenby said. “It’s just more of a letdown.”

Friday’s announcement was the second part of a double-whammy of sorts for players trying to climb professional golf’s ladder. The Korn Ferry Tour had recently announced that it would not hold its annual qualifying school this fall. “So I lose a whole year,” Allenby said. “That really sucks.”

Allenby had a solid year on the 2019 Mackenzie Tour, finishing 17th on the money list. Wheeldon also remained exempt by finishing 40th. Both will carry their exempt status into the 2021 Mackenzie Tour season, but on Friday that seemed like a long way off. Allenby acknowledged it will be hard to stay motivated. “For me, it will be extremely difficult,” he said. “I like having targets in my sights and without that, it will be a lot harder.”

Allenby will compete this summer on the Vancouver Golf Tour and insisted he will not let his dream die despite all the recent bad news. “I am way past that moment of wonder of what it is I am doing or whatever,” he said. “I am fully committed. One way or another, I am going to get to where I want to be whether it takes one more year or five. It’s what I love to do.”

For the next while, Allenby figures to be pulling more shifts in the pro shop at Langley Golf Centre. “I guess that is what I have to look forward to for the next while,” he said. “It is kind of sad. This is my third day in a row and it just seems like Groundhog Day, it is so normal. I am used to being in different places and preparing for different venues. You get spoiled that way with the life I have led and now it seems so mundane.”

Wheeldon has kept busy this past winter and spring playing the Outlaw Tour in Arizona, where he leads the money list with just one official event remaining. He has a spot in tournaments in St. Louis and Pittsburgh in June. The rest of the summer, however, looks bleak from a golf perspective. “July, August and September looks pretty bare as far as golf goes,” he said.

Still, it figures to be an eventful summer for Wheeldon. He and his fiancee are getting married Sept. 26 in Arizona. “We have our wedding in September so we still have things to look forward to. It is not going to be a boring summer by any means. “We are hoping the border opens up and all that quarantine stuff gets lifted as well, so that our families can make it.”

Three British Columbia events -- the Canada Life Open at Seymour Golf & Country Club, the DCBank Open at Uplands Golf Club in Victoria and the GolfBC Championship at Gallagher’s Canyon Golf & Country Club -- are among 13 tournaments cancelled by the Mackenzie Tour. The Mackenzie Tour cited border restrictions and mandatory quarantines in announcing its decision to cancel the 2020 season.

“With growing uncertainty surrounding the border and the 14-day quarantine regulations, among other factors, we’ve weighed all of our options and concluded that it is not feasible to play this summer,” Mackenzie Tour executive director Scott Pritchard said in a news release.

“With the safety of the communities we play in mind, as well as the well-being of our players, sponsors, tournament organizing committees, volunteers and golf course staff, we came to the realization that this is the best decision for everyone involved.”