Nick Taylor has a plan for his return to the PGA TOUR and it has everything to do with his family.

Taylor is not in the field for this week’s Charles Schwab Challenge in Fort Worth, Tex., as the PGA TOUR resumes play after a three-month hiatus due to the COVID-19 pandemic, and the Abbotsford native won’t be playing the following two weeks, either, at the RBC Heritage and Travelers Championship.

Taylor instead plans to return for the first of two events at Muirfield Village in Columbus, Ohio in early July. Then he plans to play every week through, hopefully, the Tour Championship on Labour Day weekend in early September.

Taylor’s situation has been complicated by the fact that he and his family -- wife Andie and their seven-month-old son Charlie -- returned to Abbotsford from their Scottsdale, Ariz., residence in late April so they could be close to their families.

“I just wanted to come back up here because Andie and Charlie aren’t going to travel with me on Tour, so when I leave I wanted them to be here, closer to family,” Taylor said in an interview with British Columbia Golf. “That was the main reason we came home.”

And the fact that Taylor would have to self-isolate for two weeks when he returns to Canada after playing events made him decide to delay his return and play one long stretch of golf. “Once I go down there I am going to play the rest of the season out, so starting right away didn’t make any sense because I’d be gone for three or four months.

"The longer I waited I could reduce that to eight or nine weeks which again sucks, but it is shorter than it could be and I’ll come home after that.” 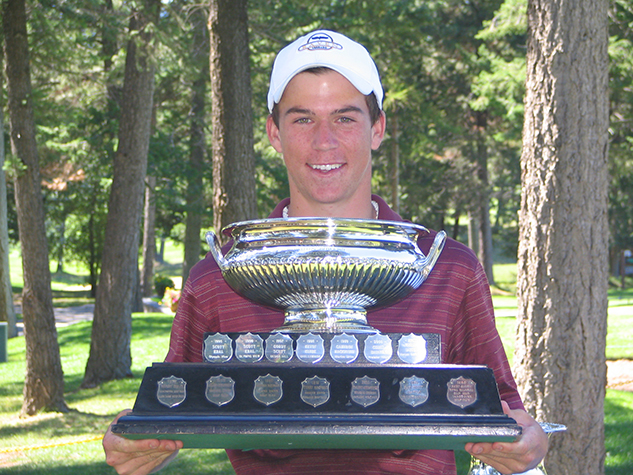 It helps, of course, that Taylor has put himself in such a good position in terms of his status on the PGA TOUR. His win at the AT&T Pebble Beach Pro-Am in early February has him 18th on the FedEx Cup points list heading into the Charles Schwab Challenge. He’s a lock to make the PGA TOUR playoffs and his exempt status is guaranteed through the end of the 2022-23 season.

“Absolutely, the Pebble Beach win makes a decision like this easier to make,” Taylor said. “But in the big picture I am still going to play four or five events before the playoffs start, so I am not going to be missing that many events.

“Unfortunately, the first three -- Colonial, the RBC Heritage and the Travelers -- are kind of three of my favourite tournaments. But the silver lining is I get to sit back and see what the new normal is out there with the testing and social distancing.”

Like so many golf fans, Taylor said he figures to be glued to his television watching coverage of the Charles Schwab Challenge. “I typically watch it when I am not playing, but I think everyone is curious,” he said.

“I am excited to watch. It will be interesting with no fans and just how eerily quiet it will be. I am most interested to learn about what is going on behind the scenes with everybody that I know. It will be nice to talk to some of my buddies to get the report back.”

Taylor acknowledged that when he does return to play, it will be tough to be away from his young son for such an extended period. “That will be hard, especially given that I have been with him for pretty much 24/7 the last three months. That has been a great bonus, especially at his age, to be so involved in everything. We’ll obviously Facetime as much as we can. We will make it work.”

Taylor’s last full event on the PGA TOUR was at the Arnold Palmer Invitational in early March. He then played one round at the Players Championship the following week before the event was cancelled.

He can’t remember the last time he has gone this long without playing competitive golf. Taylor did play in a one-day Vancouver Golf Tour event earlier this month at Cultus Lake Golf Course.

And he’s started playing a fair bit of golf locally to try and shake off some of the rust. Much of that has been at the course he grew up on, Ledgeview Golf Club in Abbotsford. “I played it this morning,” Taylor said.

“I have played it five or six times since I've been home. I have actually played around the (Fraser) Valley quite a bit. I played Sandpiper yesterday, and I have played Chilliwack and Cultus Lake. It's been fun to get out and play some of the courses I haven’t played in so many years.”

CHIP SHOTS: Fellow Abbotsford product Adam Hadwin is in the field for this week’s Charles Schwab Challenge. Merritt’s Roger Sloan did not draw into the field in Texas, but will play at next week’s RBC Heritage in Hilton Head, S.C.