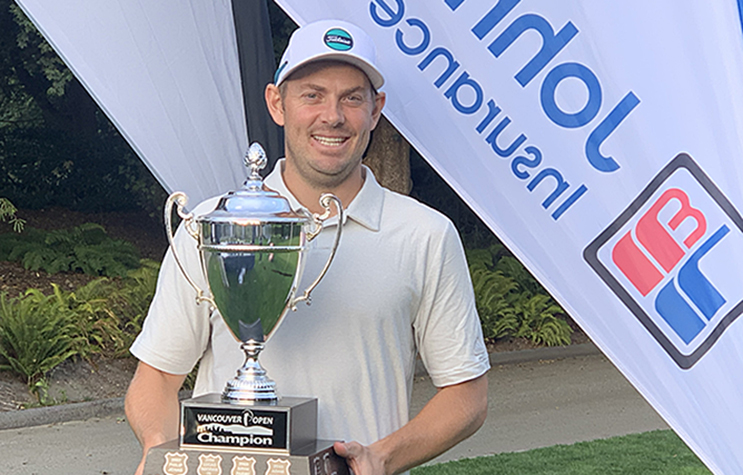 Steven Lecuyer says he is playing less aggressive golf and taking a more conservative approach to the game than he once did. It paid dividends on Sunday as the 32-year-old Edmonton native, who now now calls Vancouver home, won his second Vancouver Open title.

Lecuyer began the final round tied for the lead but had built a six-stroke cushion by the time he made the turn at Fraserview Golf Course. He ended up winning by four shots after closing with a six-under 66 to finish the 54-hole event at 15-under par.

“I am approaching the game a little differently now, not really being aggressive at all unless I totally need to be,” Lecuyer said. “I didn’t feel like I needed to be aggressive today at all.

“I just played really solid today. I tried to not make any bogeys. I did make one bogey and it was just a little silly putt (on the 16th green). It was just a solid day. I have learned to play golf a different way than I have in the past, so it’s nice.”

Lecuyer, who now teaches out of the new Vancouver Golf Academy in Coquitlam, earned $8,500 for winning the 15th playing of the Vancouver Golf Tour’s marquee event. He won the the 2019 Vancouver Open by one shot and has become just the second multiple winner of the event. PGA TOUR regular Adam Hadwin of Abbotsford is a three-time Vancouver Open winner.

Kevin Stinson of Mission and Kevin Spooner of West Vancouver tied for second at 11-under and each took home $4,000. Stinson had moved to within three shots of the lead midway through the back nine, but made a bogey on the par 3 16th that ended any hope of catching Lecuyer.

“I made a mistake early by doubling my third hole and I knew I was going to have to make as many birdies as possible,” Stinson said. He did that, recording seven birdies and an eagle in his round of 66.

Stinson headed to the parking lot shortly after completing his round. He is playing in this week’s PGA of B.C. Championship, which began Monday at Rivershore Golf Links in Kamloops. Riley Lamb of Port Coquitlam was fourth at eight-under, one shot better than fifth-place finisher Christine Wong of Richmond.

PASSING GRADE: Victoria’s Naomi Ko has comfortably advanced to the second stage of the LPGA and Symetra Tour qualifying school. Ko tied for 16th at seven-under par at the first stage of Q school in Rancho Mirage, Calif. The top 95 players and ties advanced from the field of 336. Kelowna’s Megan Osland just missed as she tied for 96th. Samantha Richdale of Kelowna also failed to advance.

TOP-20 FINISH: Langley’s James Allenby finished 14th at the Forme Open at TPC River’s Bend in Maineville, Oh. Allenby completed the event at 18-under par, eight shots behind winner Corey Shaun of Encinitas, Calif. Kimberley’s Jared du Toit tied for 36th at 12-under par. The Forme Tour resumes Sept. 1-4 at the Rolling Green Championship in Springfield, Pa. That event is followed by the season-ending Forme Tour Championship the following week in Ringoes, N.J.

HOLMES FOURTH: Former UBC Thunderbird Evan Holmes placed fourth at the Mackenzie Tour’s Osprey Valley Open in Caledon, Ont. Holmes’ four-round total of 14-under par was nine shots behind winner Noah Steele, an amateur from Kingston, Ont., who is a member of Canada’s national amateur squad. Kelowna’s Cole Wilson tied for 36th at two-under par, while another former UBC player, Zahidali Natu of Richmond tied for 38th at one-under. Other British Columbians who made the cut included John Mlikotic of Kelowna (T49 at two-over) and Kaleb Gorbahn of Smithers (T53 at five-over). The Mackenzie Tour heads east for this week’s Prince Edward Island Open.

SEASON ENDS: The FedEx Cup playoffs only lasted two rounds for British Columbians Roger Sloan and Adam Hadwin. Both players missed the cut at the Northern Trust tourney at Liberty National in Jersey City, N.J. and have not qualified to play in the second playoff event, the BMW Championship in Owings Mills, Md. The 2021-22 PGA TOUR season begins Sept. 16-19 at the Fortinet Championship in Napa, Calif.

SVENSSON SHARP: Surrey’s Adam Svensson tied for 20th at the Albertson’s Boise Open, the first of three Korn Ferry Tour Finals events. Svensson has already locked up his 2021-22 PGA TOUR card by virtue of finishing inside the top 25 on the Korn Ferry Tour points list, but can improve his status by playing well in the three Finals events. Vancouver’s Stuart Macdonald missed the cut in Boise. Macdonald and Svensson are both in the field for this week’s Nationwide Children’s Hospital Championship in Columbus, Ohio.

PEACE PORTAL SOLD: Peace Portal Golf Course in Surrey has been sold to local buyers after several offers were made to purchase the facility. “We had a number of unconditional offers, all with varying amounts of non-refundable deposits,“ said listing agent Brad Newman-Bennett of Cushman & Wakefield. “There has been a substantial deposit that has been paid in trust and I think there is plenty of incentive based on the size of the deposit that this group will close for sure. Otherwise, they are forfeiting a pretty substantial amount.”

Newman-Bennett said the deal, believed to be in the $30-million neighbourhood, is scheduled to close on Oct. 4. Newman-Bennett would not disclose the names of the buyers, who are not currently in the golf business. “I think their intention is to continue to operate it is as a golf course, so no major changes on that front,” he said.