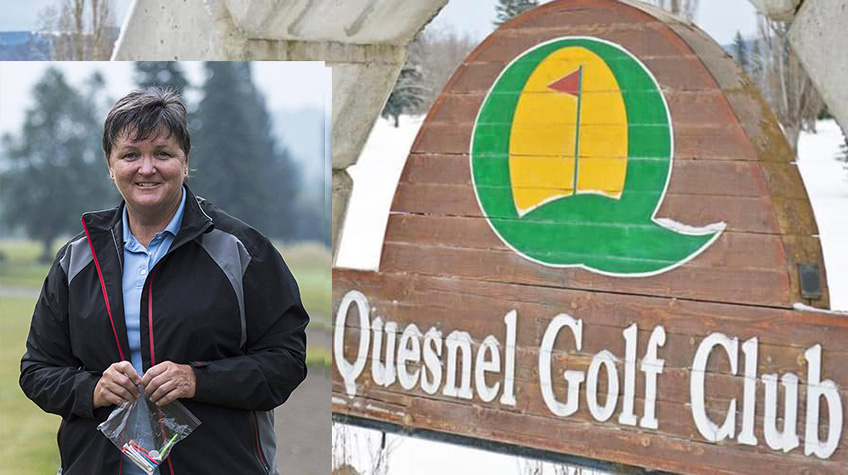 Quesnel Golf Club has new local owners who have selected a familiar face to run the facility. Quesnel native Kathy Gook is returning home as general manager and director of golf. She was hired by new owners Joe Hart, Dennis England and Kit and Gary Collins.

“I know the new owners very well,” said Gook, who has spent the past three years as director of golf at Bighorn Golf Course in Kamloops. “They are local people who have supported the community over the years in so many different areas and now they are doing the same with the golf course.”

Gook is happy to be returning home to a course and community she knows well. She grew up not far from the course and worked there from 2015-2018. “It is always nice to come home,” she said. “I know a lot of the golfers there and I look forward to seeing them again and working with everyone again.”

Gook is a highly regarded instructor. She was recently named by the LPGA as one of its top 50 teachers. Gook is looking forward to doing more teaching in Quesnel. “I started the Special Olympics group here and they are all very excited that I’m back,” she said.

“We have 20 to 25 athletes and we are going to get them going again. They haven’t had a tournament for a couple of years so I hope to run another Special Olympic tournament and bring in athletes from Prince George, Williams Lake and places like that.”

Gook also plans to bring what she calls Operation 36 back to Quesnel Golf Club. It’s a program that Gook says is extremely popular with new golfers, juniors and even some experienced players. “There are nine different levels that participants go through and their goal is to shoot 36,” Gook said. “So we start 25 yards from the hole and they play nine holes and their goal is to shoot 36 and if they do they graduate to 50 yards and then they go to 100 yards.”

Quesnel Golf Club opened in 1959 and has become a fixture in the community. But in recent years, its conditioning suffered and membership has dropped. “I left in 2018 and we had a good 300 members,“ Gook said. “I think they have dropped down to around 200, so we want to get that membership group back up again.

"There is a real influx into golf right now and we just want to be able to capture those people. Get them back wanting to be at the golf course and really making it a community asset. We also want to get tournament play back. They haven’t been doing tournaments there recently and I’ve already had three companies contact me regarding tournaments for this year for fundraisers and things like that.”

TOP 5 AT SOUTH BEACH: Coquitlam’s A.J. Ewart continued his fine play of late with a tie for fifth finish at the South Beach Invitational Amateur, which was played at Miami Beach Golf Club. The event draws top amateurs from around the world. Ewart completed the 72-hole tourney at eight-under par, seven shots behind winner Finigan Tilly of San Carlos, Calif. Ewart didn’t have to travel far for the event as he is in his junior year at nearby Barry University in south Florida.

Ewart was recently named to Golf Canada’s 2022 national team. He had spent some time on Golf Canada’s junior squad a few years ago. “I am just thrilled he is back on the team,” said national team head coach Derek Ingram. “I always liked A.J. and have always believed in him. I thought Barry would be a great place for him and it has been. He’s followed in the steps of Adam Svensson. He’s a great player and he has got a really good attitude and I think he has found a spot where he is excelling.”

LONG DISTANCE RECRUIT: The newest recruit joining the University of the Fraser Valley’s women’s golf team is coming all the way from South Africa. Zahn Scholtz hails from Port Elizabeth and was ranked as high as 17th in South Africa’s junior golfer rankings. “The addition of Zahn is big for our program - we’re getting a player who can come in and make a difference right away,” said UFV women’s golf coach Cody Stewart. “She has proven as a junior that she can play well in big events which is key for us as we look to improve our finish in Canada West. She’s a hard-working and driven player who wanted to join a program she was confident would make her better, and we’re thrilled she chose UFV.”

NEW FEATURES: Following something of a sneak preview this past summer, Sagebrush Golf Club in Merritt is planning its grand re-opening for April 30. The club, which has come out of mothballs after being shut down for seven years, is promising a couple of new features. It will be introducing what it is calling Double 8 Ranch, a 16-hole, 600-yard short course that will be located below the seventh fairway and offer great views of Nicola Lake. The short course will offer eight-inch cups for what Sagebrush says will be an “avalanche of holes-in-one.” Sagebrush’s Badlands putting course will also be illuminated next season to allow for some night-time putting.