Holly Stewart was 12 years old when she began caddying at Victoria Golf Club and in those days it often felt like the bag she was carrying weighed as much as she did.

On some days, particularly when the wind whipped off the water and swept across the oceanside layout, her ‘loop’ was something of a balancing act. “You’d arrive at the club and it’s like, oh, it’s a beautiful day, nice and sunny, and then you get out there and the wind is whipping all around you,” Stewart says.

“And as a tiny little 12 year-old I did not have good balance. I slid down hills a few times because I couldn’t stand up.”

Those difficult early days are a distant memory for the now 18-year-old Stewart, who has earned a prestigious Chick Evans Caddie Scholarship that will take her to the University of Washington in Seattle this fall. That scholarship, which includes tuition and housing, is estimated to be worth more than $120,000 US.

Stewart, who is in Grade 12 at École Victor-Brodeur, a French school in Victoria, is most appreciative of the incredible opportunity the Evans Scholarship affords her. But she stresses she also benefitted so much from the more than 100 rounds she has caddied for club members the past few years.

“When I started caddying, I was very shy, I hardly spoke at all,” she says. “But over the years I started to open up and that’s because every golfer I caddied for helped me feel welcome and comfortable in their group. That helped me to open up with them.

"It started with them kind of making jokes with me. I started investing myself in their conversations and I’d actually start telling jokes. So over the years I got more and more comfortable and that has extended to the rest of my life as well, in school and sports. I speak up now and I can do oral presentations with no issues.”

The Evans Scholars Foundation was founded in 1930 with money donated by amateur golfer Charles (Chick) Evans. The foundation has helped more than 10,000 caddies graduate from college since 1930. These are not scholarships that go to country club kids. Applicants must come from modest means and the Evans Foundation vets candidates and their families very closely. Academic standards are extremely rigorous and applicants are also judged on their character. 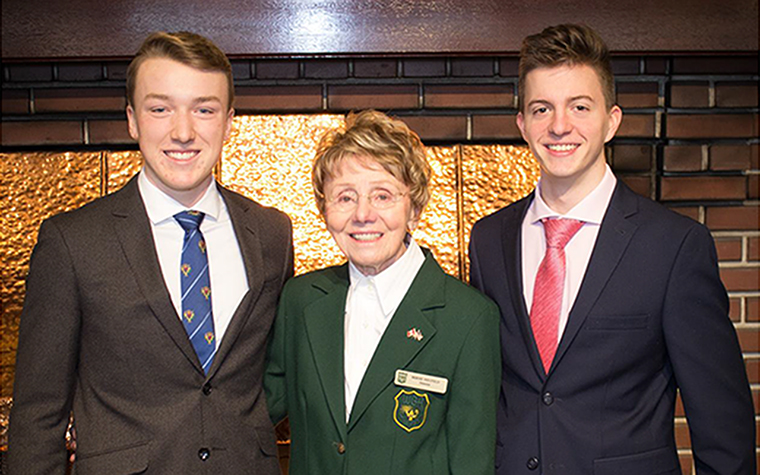 Stewart, who has received many congratulatory emails and texts from VGC members and friends, will live with about 30 other Evans scholars at Scholarship House, which the Evans Foundation opened three years ago at the University of Washington. There will be one very familiar face to greet her when she moves in late this summer. Her brother, Lachlan, earned an Evans Scholarship two years ago. “I think he is really excited because I used to cook for him at home and now he thinks I will be cooking for him down there,” Stewart says with a laugh. “He won’t be living off macaroni any more.”

Caddying has become much more than a job for Stewart. After feeling a bit uncomfortable in the early days, she quickly came to embrace it. “I do feel like at the start I struggled a bit with getting out on the golf course every day,” she says. “I could see my brother going out all the time and it seemed so easy for him. He never had any issues. But it would take me a long time to get out there.

"But as soon as I did I always enjoyed it. No matter the weather or who I was with, it was always a great time. You are outside, you are getting some exercise and meeting really interesting people. At the end of the day, that is all that matters. It is not about the money, it’s not about the hours toward the scholarship. That’s all important, but really in the moment you are just having a lot of fun.”

Victoria Golf Club is B.C.’s oldest golf course and is consistently ranked as one of the top courses in the country. It has been part of the Evans caddie program for the last 14 years. Jenny Dobell, a Victoria Golf Club member who volunteers to help run the Evans program at the club, has witnessed Stewart’s growth as a caddy, but more importantly, as a person.

“Holly has an amazing work ethic and determination,” Dobell says. “She is actually my husband’s caddie. He golfs in a group of 12 men who play every Saturday morning 52 weeks of the year. And she caddies for them all winter long. When they started with her she could hardly speak, she was so shy. But year after year they really worked on her and made jokes with her and told her their stories.

“That’s the key to the Evans program, is how the membership and the caddies sort of form this bond that helps the caddies become adults. She became an adult working with them. She really came out of her shell, she smiles and laughs with them, she is really part of their group.”

Victoria Golf Club has now seen nine of its caddies earn Evans scholarships and Dobell says the members feel immense pride each time one of them earns that ultimate prize. “It is just a feeling of pure joy,” Dobell says. “First, they start when they are so young. Holly started when she was 12 years old. So to see them go from a middle-schooler to a graduate going off to have this huge adventure, it makes us feel proud and there is a feeling of real excitement around the club when one of our caddies earns the scholarship.”

Stewart will continue to caddy every Saturday until she graduates from high school in June and then plans to do more of it this summer before she leaves for Washington. The golf course has become a second home of sorts for her and Stewart says she owes so much to the club and its members who have supported her along the way.

“It is a beautiful course and I’d just like to say a thousand thank-yous to all of them: The team who helped out the caddies; the staff at the club who supported us and made sure we had everything we needed; my mentor Jenny Dobell, who was absolutely incredible. She held my hand along the way, helped me with my essay, making sure I was getting things in on time. And of course my parents and my family.

“I think one of the biggest thank-yous is definitely to a group of golfers who took me out regularly every Saturday and helped motivate me to keep going and kept telling me, ‘we’re all behind you.’ They were supporting me and wanted me to do well. I never wanted to let them down because they influenced me so much and helped me develop into the person I am now.”

Stewart plans to major in geography at Washington and can’t wait to get started. “I am kind of hoping I will get a career in urban planning and that might give me a chance to travel and study all around the world,” she says. “I am so excited. I am ready to move on and try something new. I am already planning what I am going to do when I get there, how I am going to decorate my dorm room, what meals I am going to make.”