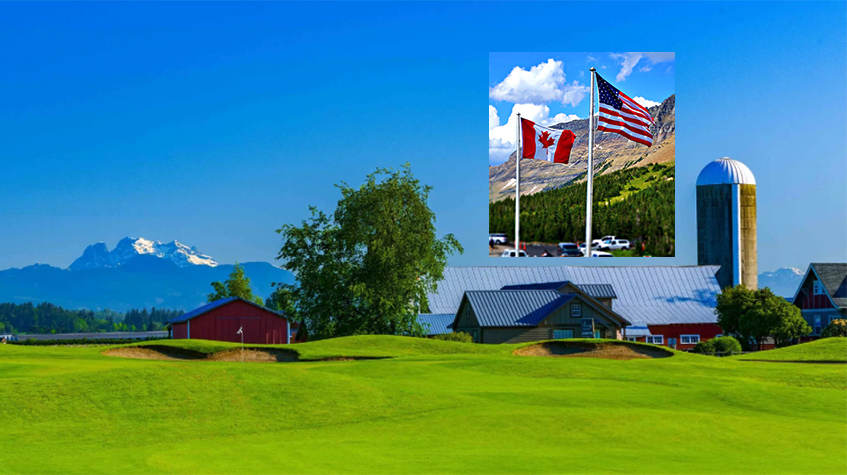 The British Columbians are back and no one is happier about that than the folks at Homestead Farms Golf Course in Lynden. Homestead has always relied heavily on British Columbia traffic, so when the border closed more than two years ago due to Covid-19, it had a devastating effect on the course.

“I would say it is at least half of our business,” says Trevor Parsons, who works in the Homestead pro shop. “We’re right on the border so the last couple of years have been tough. We have been missing the Canadians.”

As of April 1, costly Covid testing requirements that kept B.C. golfers north of the border, were dropped. Whatcom County courses are obviously hoping to see lots of B.C. golfers this spring and summer.

Homestead hopes its bargain basement green fees -- currently $30 Cdn cash for 18 holes -- will lure golfers back across the border. “We have had a lot of British Columbians calling us and we’re definitely excited for them to get back down here,” Parsons said.

Down at Sudden Valley Golf Course, director of golf Brian Kruhlak -- who is a dual citizen and played for the University of B.C. golf team in the 1980s -- has planned a special tournament to welcome back British Columbians. The Can-Am Unity Classic will be played at Sudden Valley, on the shores of Lake Whatcom, on Saturday, April 30. The event will see Canadians and Americans paired together in a scramble format.

“I have lots of friends and family up there so it is kind of personal to me,” Kruhlak says. “Sudden Valley has such a connection to Canada and the border closure has been super painful for us here. I foolishly planned this tournament back in December of 2020. I was pretty sure we would be hosting it in the spring of 2021, but that didn’t happen. So we have been looking forward to hosting this thing for a while. Everybody here is pretty darned excited about the return to normalcy.”

For more information on the Can-Am Unity Classic, call the Sudden Valley pro shop at 360-734-6435 or email mfield@suddenvalley.com Sudden Valley is also offering Canadian money at par through April 15 on green fees, cart rentals and range balls. Reservations must be made in advance by phone.

It’s not only public green fee players who will be heading south to tee it up. Private clubs like Semiahmoo in Blaine and Bellingham Golf & Country Club will be welcoming back large numbers of Canadian members who have not been able to use their memberships because of the previous testing requirements.

HADWIN HOT: Abbotsford’s Adam Hadwin recorded his third straight top-10 finish on the PGA TOUR with a tie for fourth at the Valero Texas Open in San Antonio. Hadwin birdied five of his final seven holes in Sunday’s final round to finish the event at 10-under. That was three shots behind winner J.J. Spaun. Hadwin earned $344,000 and moved up 14 spots to 37th on the FedEx Cup points list. He’s made $1,097,930 in his last three starts. Merritt’s Roger Sloan tied for 53rd at two-under par and earned $20,244. Sloan stands 150th on the points list. Abbotsford’s Nick Taylor (105th) and Surrey’s Adam Svensson (109th) both missed the cut.

LAMEY CUP RETURNS: After a two-year hiatus due to the Covid-19 pandemic, the PNGA Lamey Cup will be played May 3-5 at Bellingham Golf & Country Club. The Ryder Cup style competition features teams from British Columbia, Idaho, Washington and Oregon. This will be the 15th playing of the event. British Columbia Golf recently selected its 12-player roster for the competition. On the women’s side, it includes Christina Proteau of Port Alberni and Nonie Marler of Vancouver (Mid-Amateur) and Jackie Little of Procter and Shelly Stouffer of Nanoose Bay (Senior).

On the men’s side, B.C. will be represented by Saare Adams of Victoria, Mike Aizwa of Richmond, Brent Wilson of Cobble Hill and Nasheel Kassam of Vancouver (Mid-Amateur). Craig Doell of Victoria and John Robertson of Courtenay will play in the Mid-Master competition. Norm Bradley of Kelowna and Mike Kennedy of North Vancouver will compete in the Senior Men’s competition. North Vancouver’s Greg Moody will be B.C.’s non-playing captain.

MARINE MEMORY: Jennifer Kupcho, who won the LPGA Tour’s first major championship of the season this past weekend at Mission Hills in Rancho Mirage, Calif., holds the women’s competitive course record at Marine Drive Golf Club in Vancouver. Kupcho shot that round -- a seven-under 64 -- in the first round of the 2018 Canadian Women’s Amateur Championship at Marine Drive. Her win Sunday at the Chevron Championship was the Colorado native’s first on the LPGA Tour.

SECOND FOR SFU: Simon Fraser University’s men’s golf team wrapped up its regular season in impressive fashion with a second-place finish at the Hanny Stanislaus Invitational in Turlock, Calif. SFU finished the 54-hole event with a team score of three-under par. That was just one shot behind first place Western Washington University. SFU was paced by freshman Ryan Hodgins, who finished fourth at five-under par. SFU’s next event is the Great Northwest Athletic Conference Championships, which go April 19-20 at the Coeur D’Alene Golf Resort in Idaho.

JOHNNY ON THE SPOT: John Morrow won the men’s individual title and led University of Victoria to the team title at the University of the Fraser Valley Spring Invitational played at Chilliwack Golf Club. Morrow shot rounds of 68 and 66 to beat teammate Robin Conlan by eight shots. Victoria won the team title by 11 shots over UFV. UFV won the women’s team title by six shots over UBC-Okanagan. Victoria’s Sukriti Harjai won the women’s individual title by seven shots with a two-round total of even par.

CLASS IN SESSION: The fifth of seven PGA Tour Canada spring qualifying schools goes this week in San Jacinto, Calif., where Kaleb Gorbahn of Smithers is in the field. Duncan’s Tristan Mandur, the 2020 B.C. Amateur champion, failed to get status at a Q-school last week in the Phoenix area. Mandur, who is completing his senior year at the University of Utah, had entered the event as an amateur.

SEASON DEBUT: The Vancouver Golf Tour begins its regular season schedule with this week’s Gatekeeper Systems Open at Mayfair Lakes Golf & Country Club in Richmond. Pros in the field for the April 5-6 event include Chris Crisologo of Richmond, James Allenby of Langley, Kevin Stinson of Mission, Ilirian Zalli of Richmond and John Mlikotic of Kelowna.

CHIP SHOTS: Fourteen of 15 Kelowna golf courses are now open for the season. Tower Ranch will be last to open on April 11. . .Predator Ridge in Vernon opens its new season on April 8. Green fees are $175 until May 1, when they rise to $225. . .Zach Olson of Chilliwack Golf Club shot a six-under 64 and won the G&G Tour’s season-opener at Capilano Golf & Country Club. Thirteen-year-old Alex Zhang of Richmond shot rounds of 68 and 69 and his seven-under total beat the field by eight shots at the American Junior Golf Association’s Preview at Morongo tourney in Beaumont, Calif.