Greg Moody has a rather simple explanation for why he spends considerable time giving back to the game of golf. “I just enjoy volunteering,” Moody says. “I think you’re either born with a volunteer gene or you’re not.”

Moody clearly has his. A highly respected rules official and a longtime champion of junior golf, Moody is the new president of British Columbia Golf. Moody was officially elected by the BC Golf board on April 3rd. He jokes that it is not a position he expected or coveted.

“I never aspired to this position,” says Moody, a North Vancouver resident who has been a member of Seymour Golf & Country Club since the mid-1980s. “I just like volunteering. This is something I started to do when I retired and I have especially enjoyed working with the kids.”

Moody has supported the game at the club, zone and provincial levels. Just a year or so after becoming a Seymour member, Moody was persuaded to join the club’s board. He then became club captain and decided to try and do something about slow play at the course.

Moody had read an article in a golf magazine about speed rating your golf course and with the help of a friend, who was a surveyor, he did just that. “My buddy brought his (surveying) wheel and we did a whole bunch of measurements from green to tee and things like that and we speed-rated at 3:47.

"I went to my committee and said we’re putting in a time clock and you’re getting 4:15 to play it. They said it won’t work, and I said, 'it had better work, because we’re doing it.' So we put it in and it did work. I was one of the first guys to use a time clock.”

Moody has spent countless hours supporting the Zone 4 Junior Tour, which he now runs. Watching and helping kids develop their games has given him great satisfaction. “I enjoy seeing the Adam Svenssons of the world go to the PGA TOUR,” he says. “That is really neat.”

About 20 years ago, Moody was persuaded to get involved at the provincial level as a rules official. In recent years, he has been a fixture at many of British Columbia Golf’s championship events, serving as tournament and rules chair.

He has gained the respect of players as a straight-shooter who can calmly and clearly make rulings during tournament play. “The best part of the rules side is the people I have got to meet and work with,” Moody says. “It is a pretty neat fraternity.” 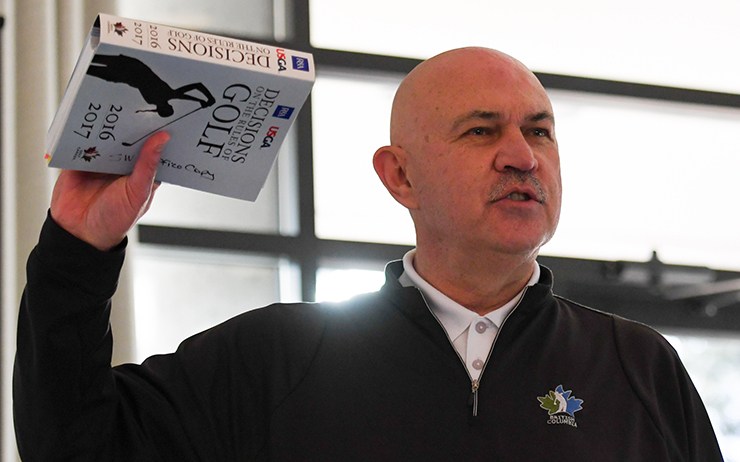 As Greg Moody Will Openly Admit, He Is First And Foremost A 'Rules Official'

Through his work in Zone 4 and on the Zone Council, Moody earned a spot on British Columbia Golf’s board of directors about four years ago. Kris Jonasson, the chief executive officer of B.C. Golf, says Moody is eminently qualified for his new position.

“And Greg has done course set-up and rules for a number of years at several of our events, including the B.C. Amateur, and he is extremely well regarded for the quality of the way he sets up championship golf courses. He is well known to the players.”

“It’s a tough act to follow because Michelle is brilliant,” Moody says. “She is a very smart lady and Golf Canada is going to love having her. She is going to be very good for that board.”

Moody also knows he has a strong board to work with at British Columbia Golf. At the March 30th AGM, Hugh Wong of Kelowna, Samuel Oliphant of Vancouver and Christina Proteau of Port Alberni were new additions to the board. “I give Kris credit for going out in the community and finding people with specific skill sets and diversifying the board,” Moody says. “It’s no longer just a bunch of golfers.”

As president, Moody will represent British Columbia Golf at various events. He’ll serve as non-playing captain of the B.C. team at the PNGA Lamey Cup in early May at Bellingham Golf & Country Club and work as a rules official at the Pacific Coast Amateur Championship this summer at the Columbia Edgewater Country Club in Portland.

Moody will also continue to work some events in British Columbia. He will serve as the rules chair for this summer’s B.C. Amateur Championship at Christina Lake Golf Club and will also work the Canadian Amateur Championship which is being held at Point Grey Golf & Country Club in Vancouver and co-hosted by his home club of Seymour in North Vancouver.

And Moody, of course, will continue to run the Zone 4 Junior Tour. “I really enjoy that aspect of it,” he says. “I like watching the kids progress. I have got my four-year-old grandson out to the course. He doesn’t have a clue, but he asks me can we go hit golf balls. And I always say, absolutely. It’s awesome.”