What a winter it has been for Cory Renfrew.

The 28-year-old Victoria native who lives in Scottsdale, Arizona during the winter has made memories – and several big paycheques – while pursuing his golf dreams down south.

Who could forget Renfrew’s Feb. 1 round at the Waste Management Phoenix Open? Renfrew shot a (-6) round of 66 at the tough TPC Scottsdale to move up the leaderboard to a T59 finish and a nice cheque for $13,734 US.

That came six days after another 66, this time at McCormick Ranch, a few miles south of TPC Scottsdale, which allowed Renfrew to Monday qualify for the PGA TOUR event.

To put this improbable feat in perspective, imagine waking up Monday morning without a job and by Friday night, knowing you’re cashing a five-figure cheque and by Sunday night, pocketing almost $14,000 for playing a sport you love.

Renfrew would use these rounds as a springboard to a couple of big performances on the Gateway Tour, a developmental tour being played in the Southwest.

With that money put aside for expenses this season, Renfrew can concentrate on playing PGA Tour Canada and Web.com events as he tries to make his way up the golf ladder.

But Renfrew’s story starts on a cool and dark Monday night at the McCormick Ranch Golf Club. Renfrew was nervously waiting with roommate Eric Hawerchuk to find out if his 66 would claim one of the three spots into the Waste Management Open.

As the final groups came in and found out that four players would have to come back Tuesday to play for the one final spot, Renfrew was celebrating, as he and Scott Harrington learned they had made the field.

“I’m stoked,” said Renfrew as his cellphone buzzed incessantly with well-wishers and friends wanting to congratulate him. “This is the first successful Monday qualifier for me.”

Renfrew had only played one previous PGA TOUR event, the 2012 RBC Canadian Open, so there’s a steep learning curve for the proud Cordova Bay member.

Renfrew’s loyalty to Cordova is so strong that last year, when presented with a lucrative sponsorship offer by a neighbouring Island course, Renfrew had to respectfully decline.

In fact, a group of Cordova Bay members – several of whom play a regular Saturday game – were early investors in Renfrew’s talent and keep tabs on their friendly investment. “It wasn’t about the money,” Renfrew said about turning down the sponsorship. 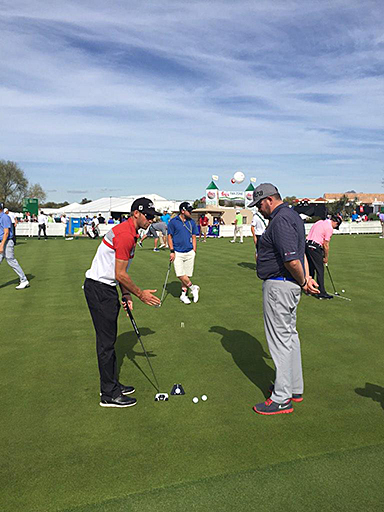 Renfrew’s success was noticed in Surrey, where one of his coaches, Matt Palsenbarg, Golf LAB at Northview Golf & Country Club co-owner, made the impulsive decision to fly down the next day to offer any assistance Renfrew would need.

Palsenbarg had to ask his wife for permission – the couple just had a newborn son with the iconic middle name of Danger – and by 7:30 p.m. Monday, he had booked a 6 a.m. Tuesday flight to Phoenix so that he could work alongside Renfrew.

Palsenbarg landed in Phoenix via San Francisco and after one of Renfrew’s friends picked him up at the airport, Palsenbarg was able to join Renfrew and caddy Andrew Ledger on the 10th tee for nine holes of reconnaissance at the TPC Scottsdale.

Palsenbarg, along with instructor Kris Hartman, have worked with Renfrew for about a year now. With IPad in tow, Palsenbarg shot footage of every aspect of Renfrew’s game and if Renfrew had a question, then the tape would not lie.

The next day, Palsenbarg spent more time with Renfrew on the double-ended practice range. Close by was Ledger, an old UBC golf teammate of Renfrew’s who joked that the Monday qualifier was his first time looping.

The highlights for Renfrew had to be coming through the tunnel at 16 on both Thursday and Sunday to make birdie while 20,000 screaming fans guzzled beer in his honour.

During the opening round, Palsenbarg was there, IPad in tow, to capture Renfrew’s birdie. On Sunday, with Palsenbarg back home watching on television, Renfrew got the crowd cheering again. After getting jeered for hitting his approach long, Renfrew hit a slow-rolling chip from behind the green that just kept running until it fell in the side door of the cup.

Two months later, all Renfrew has done is continue playing well and building confidence as the true start of his golf season begins in May, when the PGA Tour Canada season starts at Point Grey before going to Vancouver Island and the Bayview Place Island Savings Open at Uplands, a short hop, skip and jump from Renfrew’s beloved Cordova Bay.

There may also be more Monday qualifying days for Renfrew, but there may also come some sponsor exemptions, especially if he continues to display the solid form he’s shown in Arizona this winter.

Perhaps the Winter of Cory will become the Summer of Cory.