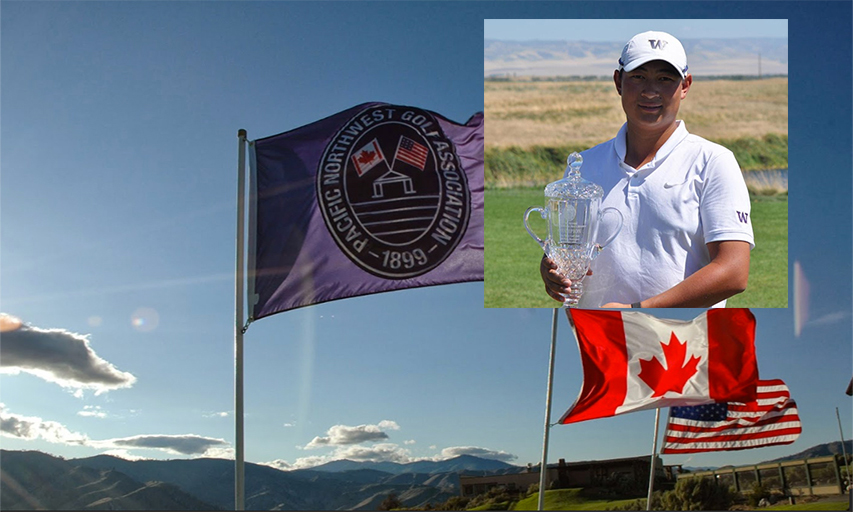 The championship was held at Wine Valley Golf Club in Walla Walla, Wash., and was conducted by the Pacific Northwest Golf Association (PNGA). The match between Yuan and Whalen saw 12 lead changes in the first 18 holes of their scheduled 36-hole match, and the two players stood All Square after the morning round.

In the afternoon round, Yuan immediately won holes 19 and 20, and although Whalen did birdie the long par-3 26th hole to gain some ground, Yuan never gave up the lead, closing out the match by sinking an 8-foot putt for an eagle 3 on the uphill par-5 33rd hole. In all, Yuan had seven birdies and an eagle in today's match.

"It was a really tough match right from the start," Yuan said. "Andrew is a really good player. We don't really know each other that much, but I knew he was a solid player. It was back-and-forth all morning. It was just shot-by-shot, and then I was able to build a little lead to start the second round, and got a little luck, and was able to pull it out at the end. You have to really know these greens to play well here. It was a long week, but by the end I was starting to figure out where to put the ball."

For Yuan, this is his first victory in a match-play format. "This is definitely one of my biggest wins."

Yuan, who earned the No. 2 seed in the championship's stroke-play qualifying rounds, had come from behind in yesterday's semifinal match with Drew McCullough of Richland, Wash. to make it to today's final match. Yuan will be a sophomore in the fall at the University of Washington. Earlier this summer, he had qualified into the Sectional stage for the 2016 U.S. Open.

Whalen, the No. 16 seed, had defeated No. 1 seed James Grierson in the Round of 16 on his journey through the match-play bracket. Whalen qualified for and played in the 2016 U.S. Amateur Four-Ball, and last week held the first round lead of the Rosauers Open Invitational, a professional tournament held in Spokane, Wash. Now a senior at Northwestern University, he made it to the Round of 16 in the 2012 PNGA Men's Amateur.

Whalen first entered the golf scene in 2011 when, as an unheralded player, he made it to the quarterfinal match of the 2011 U.S. Junior Amateur, being held that year at Gold Mountain Golf Club in Bremerton, Wash. In that quarterfinal match, he fell to the championship's eventual winner, a young Jordan Spieth.

The championship began with a full field of 168 players, 64 of whom advanced to the single-elimination match-play bracket after two rounds of stroke-play qualifying. Each match was then contested over 18 holes, with the final match being played over 36 holes.

Yuan now adds his name to the Macan Cup, which is named after legendary golf course designer A.V. Macan, a member of the Pacific Northwest Golf Hall of Fame and winner of this championship in 1913.

The Pacific Northwest Men's Amateur is one of the oldest championships in the world, and its past champions include Tiger Woods, Jeff Quinney, Ben Crane, Jeff Coston, Nick Flanagan, Jim McLean and Pacific Northwest Golf Hall of Famers Chandler Egan, Harry Givan, Jack Westland, Bud Ward and George Holland, among many others.

The Pacific Northwest Men's Amateur Championship is one of 15 major, regional, amateur championships for men, women, juniors, and seniors conducted annually by the PNGA throughout the Northwest.

The PNGA was founded on February 4, 1899. It is a 501c3 charitable, international, amateur golf association dedicated to preserving the true spirit of golf by supporting its allied associations, conducting quality championships, and promoting activities beneficial to golfers in the Pacific Northwest.

For more than a century, the Association has been a pioneer in developing competitions and services and its mission has grown and evolved. Today, the PNGA remains committed to being a truly regional organization providing benefits and services to its members and member clubs throughout the Northwest.