Play The BC Golf Fantasy Challenge 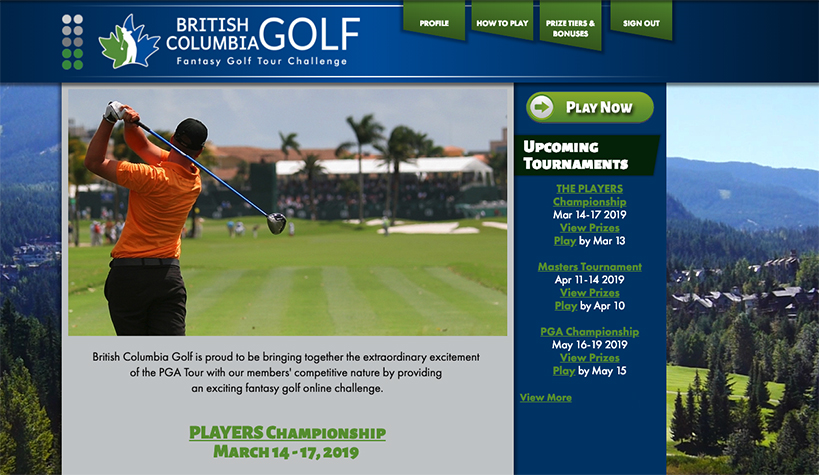 This golf season, get the provincial bragging rights for Fantasy Golf with The BC Golf Fantasy Challenge.

The contest is easy, fun, flexible...and free. Pick your team in any, or all, of six qualifying tournaments through the summer, finish in the top 10% of entrants in any one of the six and you are immediately qualified for the season-ending Championship playoff. Emerge victorious there and you will be crowned BC Golf Fantasy Challenge champion.

The Qualifying Series starts this week with the Players Championship followed by the Four Majors with the RBC Canadian Open also included. All those who qualify from each tournament will then pick a team of players from the season-ending Fedex Cup Tour Championship.

This format means that, as each of the six tournaments is a separate qualifier for the Championship round, there is no issue if you miss a tournament or two. Qualify early on and you can sit back and wait.

Along the way, participants can win some great prizes. BC Golf will be working with the courses who earned the distinction of being selected as one of the province's top ten favourites by our members to provide green fees for winners in the individual Qualifying Series tournaments. The Grand Prize and presenting sponsor will be announced later this month.

Stay tuned for word on that and in the meantime check out below how you can register to get started in search of 'Fantasy Golf Glory'.

To find out how you can enter please click HERE and follow the prompts once you open the site to register and start putting your Fantasy Golf Squad together.

All you need to do is select your golfers and complete your Fantasy Golf Tour Challenge team.

Please use this link to choose your team today, Choose Your Golfers

Player selection and changes to your team are allowed up until Wednesday, 03/13. If a golfer has withdrawn for any reason prior to the tournament, it is your responsibility to replace the golfer with another player.

The six (6) events being counted for the BC Golf Fantasy Golf Challenge are:

The Overall BC Golf Fantasy Challenge champion Will Be Determined From The Season-Ending Tour Championship: